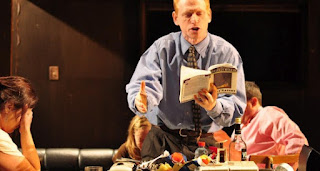 'Gatz' is a timeless classic. Literally. This might be an 8 hour show that includes every single word of Fitzgerald's 'The Great Gatsby' but it – honestly, honestly – goes in a flash. Watching 'Gatz' feels like curling up in bed with a brilliant novel (that you instinctively understand) and emerging, bleary eyed but buzzing, on the other side.

In fact, having watched this show, I'll never read in the same way again. I'm constantly astounded by how many areas of my life the theatre palpably influences but the fact this show has prompted me to reassess such a familiar constant in my life – reading – is really quite something. Hearing 'The Great Gatsby' read out loud – and watching it come to life – makes you realise just how easy it is to skim through a novel and how many beautiful phrases and startling images you miss in the process. I'll read much more carefully in the future, stopping to savour every word I might've once skipped over in haste. Unless, of course, the book is bloody awful.

This phenomenal show also reveals how monotonous and earnest the internal reading voice can be. A lot of variety is lost when you read a novel, no matter how receptive you might be. Once you connect with a novel and settle into its world, it's all too easy to slide over the subtle tonal shifts and jump over the jokes. The comic elements of a novel, in particular, can often be horribly overlooked, as the reader speeds, greedily, towards the conclusion.

The joy about 'Gatz' is that these varieties in tone, so easily missed when reading, are exposed in full techni-colour. 'Humour' is not one of the principal qualities I would've attributed to Fitzgerald but it becomes blindingly obvious, after watching 'Gatz', that Fitzgerald is a damn fine observational comic. It also becomes clear that Fitzgerald's jokes are absolutely integral to his novel. 'Gatsby' is a novel obsessed with the idea of double identities; of falsely constructed personalities and the accompanying, shaky realities they demand. Comedy proves the perfect way to explore this theme and expose the absurd gap between the private and public self.

It is the gulf between how Gatsby wishes to appear and how he actually comes across that prompts the biggest laughs. They are sad laughs, though, tinged with the realisation that life simply cannot accommodate the romantic fantasies we all secretly nurture about ourselves and our place in the world. The first encounter between Gatsby (Jim Fletcher) and Daisy (Lucy Taylor) perfectly captures the comic discrepancy between Gatsby's romantic vision and messy reality. The two lovers, reunited after so long and essentially strangers, jolt about like badly wired robots. Gatsby, who has spent his life preparing for this moment, blunders and blushes like a dumbstruck teenager. At this stage, it's fun to laugh at Gatsby's skewed perceptions but, as the the consequences of Gatsby's self-delusion grow more severe, the laughs start to catch in the throat.

What really blows the mind, though, is how the stage itself is used to explore the theme of false identity and fragile, fractured lives. Comedy might prove a brilliant way into Fitzgerald's obsession with the split self but the stage itself digs deeper still. In this stage production, Gatsby isn't only leading a double life – he's leading a triple one. Gatsby starts out as bland office worker, Jim, stuck in a grey office and surrounded by sad, washed out souls. It's only when his colleague, Nick (Scott Shepherd), begins to read from a copy of 'The Great Gatsby', that Jim comes to life and transforms into self-made man, Gatsby. It's such a clever touch, which reminds us how completely dependant Gatsby is on those around him to help sustain his own identity. Without company to corroborate his vision of himself, Gatsby is nothing. Perhaps, the show subtly suggests, those lavish parties are not held for Gatsby's guests but for himself – a chance to luxuriate in his image, safely reflected back at him by the sycophantic crowds that swarm about his grounds.

This bleak office environment also reminds us that all of Fitzgerald's characters are running, blindly, from reality. No matter how lavish Gatsby's parties are or how debauch those city jaunts become, the dank office environment still lingers in the background. When Nick is swept into New York with Tom and Myrtle, the gang run riot. By the end of their drunken festivities, the office looks like its been hit by a series of raucous Christmas parties: paper is strewn everywhere, the furniture is upended and hungover bodies loll about like corpses. The devastation on stage emphasizes the spiralling consequences of Tom's behaviour; he might be hidden away in New York but his actions, as well as every one else's, will continue to reverberate in endless and unexpected ways.

As Scott Shepherd's Nick continues reading in his measured but oh so delicate voice, the crap in the office is quickly cleared away. But the damage has already been done and the novel has quietly worked its way into our bloodstream. We realise, with amazing clarity, just how damaging these constant flights from reality can be and how quickly these flashy, 'enviable' lives can descend into ugly, sprawling chaos.