'Democracy' review 'We're in this together (Yes, both of me).' 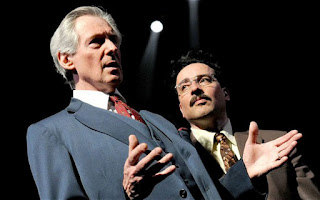 If I was asked about one of those bloody 'fantasy dinner parties', I reckon I'd just invite Michael Frayn. Hell, I might not even ask him to bring a bottle. Guzzling on my own wine, I'd watch the Euro issue magically disentangle in front of my bleary eyes. By the time desert arrived, the recession would no doubt be solved and the conflict in the Middle East would make perfect, manageable sense. Oh, and our own dear coalition government would be the butt of endless, dazzling jokes.

This will probably never happen. In the meantime, I'll have to make do with his plays – and they're really, really good. Above all, Frayn's plays are phenomenally well constructed. Underlining each of his plays, no matter how varied they might seem, is a rigorous attention to detail. The structure is always perfectly tuned – yet his plays are loose and fluid too. The characters are developed quickly but they're striking, rock solid creations. The themes work their way effortlessly into his scripts, folding in on themselves over and over again. And the timing, be that comic or dramatic, is always spot on.

Frayn is, quite frankly, a master of his craft – and 'Democracy' is one his very best works. It is a frighteningly intelligent play, but never obnoxiously so. Frayn respects and understands drama far too much, to let his ego get in the way. He might be smart but he's certainly no show off. Instead, Frayn's plays gently nudge us into thinking a little more intelligently about the world.

The historical context of 'Democracy' is one riddled with divisions (a theme that will ripple on endlessly throughout the play). It's 1969 and Germany, though attempting to rebuild itself, is still split in two. The recent election of Willy Brandt, of the left leaning party SPD, brings with it hopes of a reconciliation between the East and West. Yet the party elected to unite Germany is suffering divisions of its own, following the SPD's shaky coalition with the centrist FDP party. The political details don't matter much here. The point is, fragile unions litter the landscape. They spell out endless conflicts, clashing loyalties and deeply divided souls. Juicy dramatic fodder, indeed.

These conflicted souls – split just as deeply as their nation – pop up everywhere in 'Democracy'. The Chancellor himself can barely recognise who he has become. Deep into a whirlwind campaign trail, Willy Brandt (Patrick Drury) recalls his younger student self and talks exclusively in the third person. It's as if he's been split in two. These divisions keep on multiplying, the more entrenched the Chancellor becomes in his new political identity. He suffers severe bouts of personality-changing depression and his colleagues/enemies (these roles are always merged) drily remark of his mood swings; 'Which person of the holy trinity is he going to be next?'

The Chancellor's new aide is even more conflicted still – almost pathologically so. Gunter Guillaume (Aidan McArdle) might be from East Germany but he's been living in the West for over half his adult life. He might be spying on Brandt and constantly betraying him but he also wants Brandt to succeed and finally reconcile the East and West. He is essentially a loyal chap, who can't help but warm to the Chancellor – yet he's also as conniving as they come. At one point, Gunter affectionately remarks that his favourite day is Sunday with his son – and yet even this private confession proves to be a cover for purely political purposes.

Quite frankly, Guillaume is as screwed up as they come. And yet, he somehow still functions and forms relationships. It's incredible to see just how far these souls can be stretched without ever snapping. What's even more striking, is the instinctive desire for human connection that still burns beneath all the deception. Despite all the subterfuge and suspicion that engulfs Brandt and Guillaume, they forge a curious, close friendship. It seems that human beings, no matter what you put in their way (even a big fat wall), will always find a way to work together.