'Torch Song Trilogy' or 'Who's going to pass the baton?' 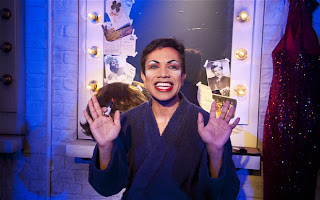 With the Church threatening to split from the State over gay marriage rights, the time is ripe for a show about a plucky drag queen. Yet Harvey Fierstein's trilogy, which bagged a Tony in 1983, is creaky and even old-fashioned.

The opening is frustratingly slow, as drag queen Arnold (David Bedella) delivers a stodgy monologue about his chequered romantic history. It doesn't half drag. The act is only saved by Bedella's gentle charm and his dazzling transformations from brawny lad to full-on glamour puss.

Douglas Hodge's direction is somewhat stiff and Soutra Gilmour's design, which frequently forces the actors behind a wall, is cumbersome. When Arnold visits his now-married ex-lover in the country, the entire act unfolds on a massive bed. The actors have to somersault, slide around and even deliver speeches, whilst another couple copulates. It doesn't work.

But then the final act kicks off. Suddenly the emotions feel thick and urgent, as Arnold confronts his mother (Sara Kestelman) about his lifestyle. When she refers to Arnold's homosexuality as a 'sickness' one realises, with a thud, that his battle for understanding has only just begun.