'Super Duper Close Up' review or 'Will you hold the camera steady?'

Super Duper Close Up, Made in China
Yard Theatre, 15th November 2018
Written for The Guardian 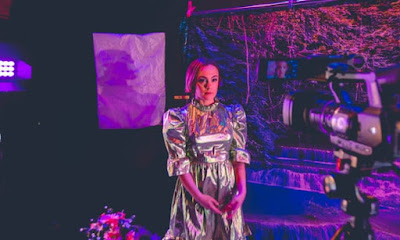 A woman in a frilly green dress stands centre stage, flanked by sparkly silver curtains. She looks girly but exhausted, stuck between childhood and maturity. The stage is equally in limbo. A projection screen hangs above a bright picture of a waterfall and odd props – flowers, clothes, make-up – lie strewn about. It looks like a film set; a funeral parlour; a karaoke bar; a luxury holiday. This is a set that doesn’t know itself, designed with an easy sense of chaos by Emma Bailey. It is the ideal backdrop for a show about an anxious actress at a crossroads, unsure of where to go next.

Made in China’s shows always feel personal but this one, conceived by the company, feels particularly honest. Jessica Latowicki performs a monologue about an experimental actor recently prone to panic attacks. The narrative focuses on an imminent important meeting with an agent, but it gradually unspools. It is a restless piece, which picks and pecks at themes such as anxiety, self-image, the tension between creativity and stability, and the searing intensity of self-doubt.
The company’s previous shows have been a lot more physical, infused with manic dancing, screwball comedy or visual gags. Super Duper Close Up is calmer by comparison and can sometimes feel a little flat. But despite the dips in energy, there is an arresting rhythm to the writing. The script is jittery and not quite in control of itself, and is repeatedly punctuated by Google searches and obsessive references to various friends’ glowing Facebook updates. As Latowicki speaks, she mimes scrolling through her phone. It’s as if the internet has become the chief driving force: the brain that now controls Jessica’s actions, feelings and fate.