'Lands' or 'I can see you fine from over here.' 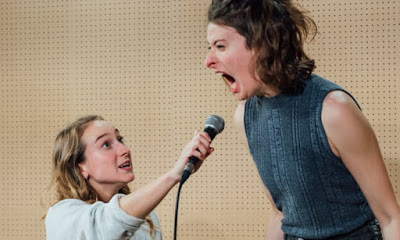 Leah loves jigsaw puzzles. She loves them so much that she framed her last effort with fairy lights. Sophie loves trampolines. Actually, Sophie loves trampolines so much that she hasn’t stopped bouncing for as long as she can remember. Leah and Sophie used to love each other, but now their own interests are getting in the way. Can the pair find a way back to what they had?
Lands is another thoughtful and offbeat show from Antler, devised by actors Leah Brotherhead and Sophie Steer, and director Jaz Woodcock-Stewart. It hasn’t the same visual swagger as past efforts – Charlotte Espiner’s set is a beige box – but there’s the same twinkle in the script, and a similar sense of theatrical playfulness. Brotherhead and Steer connect effortlessly with the audience and Brotherhead, in particular, can make a lone word sing with silliness.
Despite these committed performances, Lands – which has been around since Edinburgh 2017 – feels overworked and a touch slight. All that charming quirkiness begins to grate and the concept starts to drag. Sophie spends the entire show bouncing on a trampoline, unable to reach out to her girlfriend. It’s a smart metaphor, which explores how easy it is for couples to grow apart, but it’s not enough to sustain an 80-minute show.
Bursts of physical comedy intermittently inject the piece with fresh energy and intent. There’s an inspired section when Leah tries to coax Sophie from her trampoline with a barmy karaoke set and a series of increasingly nutty slapstick sequences. But by the end, it isn’t just Sophie (still bouncing away) who feels a little tired.