'Br'er Cotton' review or 'Let's dig up these roots.' 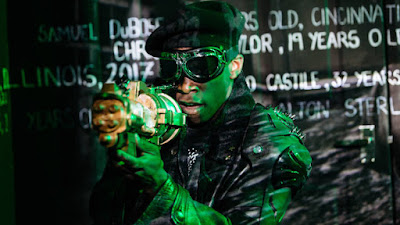 A cotton plant creeps up the walls of a kitchen, and a grand oak tree muscles its way inside. Names and dates have been written in chalk across the walls that stretch around the theatre. These are the names of young black men killed by policemen. The names cluster in the middle of the back stage wall, an angry white scrawl with all meaning lost.
US writer Tearrance Arvelle Chisholm’s powerful new play ‘Br’er Cotton’ is set in a family home in Lynchburg, Virginia. It’s the site of a former cotton mill – the very place were teenager Ruffrino’s slave ancestors once worked the cotton fields. Now young black men are being killed in numbers and Ruffrino (a volatile Michael Ajao) senses a revolution. Will his family join the fight?
‘Br’er Cotton’ has been shortlisted for a number of awards, and rightfully so. Chisholm’s writing is light and naturalistic when it needs to be but also shot through with knotty and impassioned poetry. JMK award-winner Roy Alexander Weise directs with real care and makes clever use of Louise Rhoades-Brown’s poetic video design, which turns increasingly surreal as Ruffrino’s anger intensifies.
This is a complex production and the company occasionally trips itself up: the writing pushes too hard, the actors over press or the director over-embellishes. It’s the scenes that feel least burdened by purpose that end up saying the most. The encounters between Ruffrino’s worn-out mother Nadine (an excellent Kiza Deen) and a sympathetic white police officer (Alexander Campbell) tingle with prickly humour and affection, the duo’s spectacularly awkward hug as hopeful as it is absurd.