'Buggy Baby' review or 'Are you strapped in?' 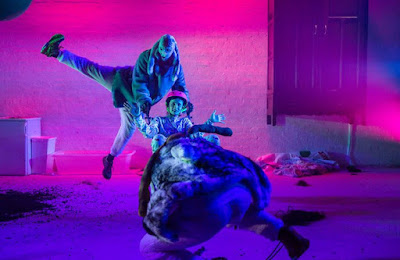 Oh, but if you could have seen their faces! For much of Buggy Baby – the latest audacious offering from The Yard – the spectators packed in around me cannot, for the life of them, figure out whether to laugh hysterically or leave angrily. Everyone looks out of sorts, a little uncomfortable in their bodies with their faces locked in weird and newly-discovered expressions. I feel odd just remembering it now.
I felt equally at odds with myself watching Josh Azouz’s play, which has been directed with near-obnoxious energy levels and flair by quirky-director-of-the-moment Ned Bennett. How I wanted to leave this production, which often seems like a mindless assault and provocation – an attempt to push us away rather than pull us in. But there is something about Buggy Baby that refuses to let me off the hook – something meaningful and perhaps something warm, despite the wilful levels of obfuscation and aggression, layered into this deeply unsettling show.
It might be about refugees. Nur (Hoda Bentaher) and Jaden (Noof McEwan) have recently arrived in London, and are now living in – well, where are they living? Designer Max Johns has covered the stage with an ugly faded pink carpet, thrown in a few mangy props and hung a huge wardrobe on the wall, through which the actors enter and exit (always with acrobatic leaps). This wardrobe might be a prison or it might be a means of escape. From inside this grand oak wardrobe will emerge some very angry human-rabbits, one giant baby and a series of alarmingly huge nappies.

Nur and Jaden have made a home for themselves in London, although this strange and sullen new home is slippery as hell and threatening as fuck. Nur has also arrived with her baby. The baby is played by a grown up – a magnificently expressive, engaging and disconcertingly likeable Jasmine Jones – and this giant baby wears a helmet on her head. She was hurt on the journey over to England and might not recover. This baby is a giant talking baby and she says to her mother, with surprising affection, phrases such as: ‘Don’t be cuntish your whole fuckin life.’)
There’s also a mound of earth in Nur and Jaden’s new home, with leaves poking out of it and increasingly large helium balloons floating above. This is where Jaden gets the hallucinogenic leaves that fuel his visions – the visions that bring human-rabbits scampering through the living room, allow babies to talk and thread real danger into their young lives. Jaden chews and chews on those leaves and the visions get wilder and more expansive. The visions begin to reach out into the audience: the music is so loud it rumbles through our bodies, the ravaged rabbits run past us, the giant balloons brush past our heads and, at one point, Nur swings an axe so wildly, we fear for our safety.
These visions are wildly disruptive and can feel hugely grating, ugly and indulgent. All too often it seems like the director is showing off, as if we’re learning what Ned Bennett feels about this writing – rather than what’s going on beneath the disjointed dialogue and crackling visions. The scenes are so jarring, the performances so disjointed, the whole production so damn self-aware yet also so triumphantly obscure, that it often takes a real effort to stay locked in. Time begins to drag, each minute more painful and disorientating than the last.
And yet there is a horror here and a rumbling fear that begins to claw at us, a wild energy that begins to pull us in. Above all – and here’s the element that I wish had been presented more strongly in this production – there is love. Baby Aya might call her mum a cunt but her mother bathes and washes her with glowing and palpable affection. Nur might creep up to her baby with a pillow in her hands and awful thoughts in her mind, but she will not perform this act and will weep. Violence might stalk through this production but perhaps the real reason it feels so violent, is because there is something valuable in here to protect. And we might want to step away from Buggy Baby, because it is ugly and confusing and hard to understand – but maybe we should stay and listen.