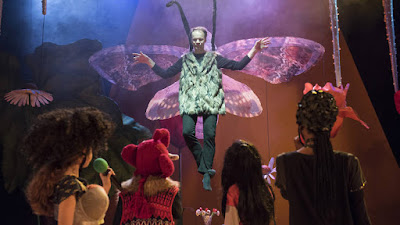 You know the old adage, never work with children and animals? Bin it. ‘Beginners’ stars a group of kids and a talking dog and it’s one of the liveliest and sharpest pieces of theatre you’ll see this year. It’s written by Tim Crouch, a wonderfully mischievous theatre-maker, and is ostensibly about a family holidaying in Cornwall – but is really about the wafer-thin divide between childhood and adulthood. It’s a properly grown-up piece of children’s theatre that reaches across the generations, makes us laugh (a lot) and touches us all.
Crouch likes to tease his audience (see the bamboozling ‘An Oak Tree’ or ‘The Author’), test our senses and generally mess with our heads. The real thrill here is that Crouch applies these exact same methods to his family show and pulls it off brilliantly. Dogs behave like humans (Amalia Vitalie is dazzling as the hound), children act like adults, adults act like children (all the cast are exquisite and Neil D’Souza a comedy genius), nightmares seep into daytime reality and – as we learn about a very sick mum in the bedroom upstairs – death begins to stalk the stage.
Chloe Lamford and Camilia Clarke’s set and costumes are bold, colourful and booby-trapped. Books, towels and endless pillows (FIGHT!) plummet down from the rafters. Later – as the kids prepare a show and their imaginations take hold – giant flowers fill the stage, baby-bees buzz above us and a sparkling mountain materialises from thin air.
The stage is gradually given over to the four talented young actors – Ethan Dattani, Rowan Davies-Moore, Nekisha Eric and Emilija Trajkovic – as we watch them struggle with boredom, loneliness and fear. Their hopes and dreams fill the space – a ballerina leaps across the stage and a butterfly-dad hovers above – and we realise these are really our hopes and dreams, only fresher and freer. We lean in and we listen.