'Tales from the Arabian Nights' review or 'We shall continue till dawn!' 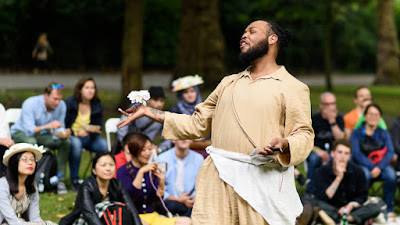 Greenwich Park: home to the Prime Meridian, which separates the eastern and western hemispheres and basically allows you to come over all Time Lord. In theory, this is an inspired location for Farhana Sheikh’s ‘Tales From the Arabian Nights’, which brings usArabian folk tales and courtly romances from across the ages. In reality, it's a tough slog, which leads its audience around the gorgeous Greenwich Park in ever-diminishing circles.
The show is led with raggedy rigour by director Jonathan Petherbridge of the newly revived Bubble Theatre, who first staged Arabian Nights in 1994. This is a community theatre company and the cast is certainly game; Russeni Fisher is particularly sparky as a lowly fisherman, bamboozled by the gods. But the acting is uneven and under-powered and the singing (with music composed by actor Nicholas Goode) and dancing feels lacklustre. The cast spends far too much time clambering up hills or performing at a distance and, as the night wears on, it gets harder to either see or hear them.


The knack to promenade theatre is to tell one big story with great clarity but this play – which has the subtitle ‘1001 Nights’ – tells lots of stories in a very confusing fashion. The structure and directing is sloppy and it gets hard to distinguish one yarn from the next. Yasuko Hasegawa Fujihara design only kicks in during the final scene (which involves four doors and endless paramours) but, otherwise, there are few visual clues to keep the tales on track, and we eventually end up in a theatrical cul-de-sac.