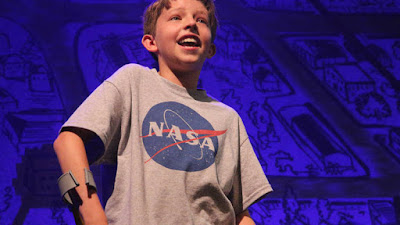 Student showcases can be such a drag. They’re either far too ambitious and the cast is overwhelmed or they’re pitched way too young and wind up feeling patronising. But '13 – The Musical' – scored by the ever-sparky Jason Robert Brown ('The Last Five Years') – is the perfect fit for this all-teenage cast from the British Theatre Academy. It’s a coming-of-age musical set in an American high school and has more spunk than a horde of randy teens.
The man of the hour is Evan – a 12-year-old kid whose life is ruined – ruined – when his parents split up and he is forced to leave NYC and move to Lamesville Indiana (actual name: Appleton). Will Evan find a new home and real friends in – cue song – 'The Lamest Place in the World'?
Ewan Jones’s production pulse with a wild energy and the cast seem comfortable and confident. There’s an edgy humour to Dan Elish and Robert Horn’s book that allows the cast to absolutely commit to their performances, with no risk of descending into schmaltz. Tom Paris’s set is colourful but simple (it’s really just a series of labelled arches) and leaves plenty of room for the large ensemble cast to let rip.
The casting is spot on. Milo Panni as Evan and Madeline Banbury as the geeky Patrice are rock-solid romantic leads and Banbury, in particular, makes the barnstorming musical numbers sound easy. The whole cast is lit up with a natural sense of mischief (with Isabella Pappas as Queen of Sass) but Ethan Quinn steals the show as side-kick Archie. Quinn owns this gift of a comic role and neatly embodies the show’s message: it’s personality and not popularity that counts in the end, kids.