'Against' review or 'Yes, yes - but against what?' 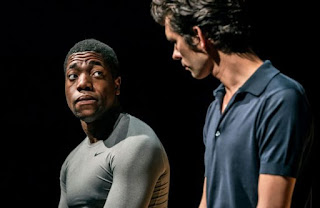 The stalls of the Almeida theatre look they’ve been hit by a huge explosion: they’re a burned and scabby mess. I find myself looking at these scarred remains throughout Christopher Shinn’s new play, Against. Maybe those stalls hold some special clues? Perhaps if I stare at them hard enough they will eventually begin to mean something? But the transformation never happens. By the end of Ian Rickson’s slow-burn production, the stalls still look like an arbitrary mess – the remnants of a fire that must’ve happened elsewhere.
According to Rupert Goold’s programme notes, Against was ‘commissioned by the Almeida practically the day I started’. That slow gestation period really shows. Against is a play that is trying to be big and brilliant, but has got lost and bloated along the way. It’s a play that wants to be about EVERYTHING – capitalism! violence! Faith! What it is to be human! – and has ended up being about relatively little.
It’s a bloody shame because there’s immense talent involved in this production – no more so than Ben Whishaw who, when on form, is basically a stage wizard. But Whishaw’s magic doesn’t work this time round. He plays Silicon Valley billionaire Luke; an Elon Musk figure, who has grown disillusioned with creating rockets and robots and has decided to Save The World instead. Luke has been hearing messages from God: ‘Go where the violence is.’ So now Luke, with the help of besotted journalist Sheila (Amanda Hale, brilliant but wasted), is going to travel the world and listen to victims of violence, in an attempt to ‘go deep’ and make the world a better place.
Some of the early scenes buzz with a subtle and eerie energy. Luke and Sheila travel to a town that has been hit by a horrific school shooting. They visit the parents and friends of the shooter and hear a particularly odd story about the shooter’s watch, which takes on a tantalisingly bizarre significance. There are few special effects from designer ULTZ, except for a strip screen above the stage, which projects the location of each scene. The type set on the screen is very large and very white and the words create a bright light that temporarily blinds. There’s little to distract the audience and for these first few scenes we learn to stop craving action and, instead, simply stop and listen.
Ben Whishaw is in his element amid such a spooky opening and it feels like his character could go anywhere – say a gun toting mad man or a bearded spiritual saviour. But this prickly energy dissipates as Shinn’s play opens out and loses its focus. Luke travels to more and more sites and talks with victims of rape, abuse and drugs. Some of the scenes have a gentle haunting quality but their impact gradually lessens. With each new location, Luke’s mission and character grows less clear and less interesting. The tone of the play implodes (is this a satire or something much more subtle and insidious?), the acting styles grow contradictory (are we going for laughs or shivers?) and the audience gets lost. There are lots of laughs during Luke and Sheila’s ‘love’ scenes (which come out of nowhere and mean little) and it feels like the audience is scrabbling about for giggles or shocks, wildly looking for something – anything – to anchor themselves to the show.
Luke’s followers grow in number as his character and mission weakens; quite why anyone would sign up this super-vague and indulgent mission is beyond me. In later scenes, set in the ‘Equator’ warehouse (a thinly disguised version of Amazon), ‘capitalism’ emerges as Luke’s chief bug bear. Two workers go through endless boxes of products, marking them up with a price gun – a Price, Gun! These scenes are far too explicit and seriously forced; a last minute dash for profundity and excitement. By the time an immediate episode of violence finally erupts, it feels both utterly predictable yet almost completely unaccounted for: a smoking gun that has missed its target.