'Guys and Doll's review or 'Shall we roll the dice?' 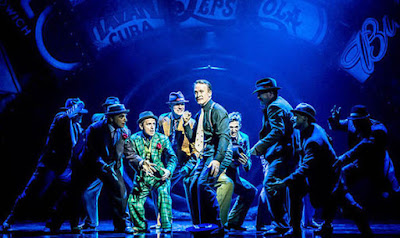 I used to fall in love at the theatre all the time. My parents would take me to musicals and I would leave with my eyes sparkling and heart swelling. That hasn’t happened in a while and it takes a lot of musical magic to carry me away these days – but Gordon Greenberg’s gleeful take on ‘Guys and Dolls’ (transferring from Chichester) made me feel twelve again. I left with feet as light as air, a head happily fuzzed up with music and romance and a full-blown crush on Jamie Parker. This isn’t the sharpest or most timely version of ‘Guys and Dolls’ – and there’s barely a touch of danger or cynicism to be found – but this is a joyful, soaring and dizzying production.

The show doesn’t take off immediately and, initially, everything feels a little overdone. The production is almost too slick and neatly contained in Peter McKintosh’s set, which frames the stage in a rainbow of 50s posters and Broadway lightbulbs. Everything is so clean, colourful and clear: Jo Swerling and Abe Burrow’s crisp book pings with finely crafted quips, Frank Loesser’s brassy music ripples through us and Carlos Acosta’s and Andrew Wright’s choreography elegantly charms us. It is all bloody good fun but feels just a little too shiny and packaged.

But it doesn’t take long for the romance, cheekiness and sheer exuberance of this musical to take a hold on its audience. That pretty much happens as soon as Jamie Parker begins to sing. Parker is a proper musical star and has a voice that – well – it bloody well sounds like love. It’s smooth and seductive and each easy sweep that Parker manages with his voice is like a bleeding gentle caress. By the end of ‘I’ll Know’ – the first duet between Parker’s good-for-nothin’ gambler Sky Masterson and Siubhan Harrison’s Bible-bashing Sarah – half of the audience is in love. We fall in love with Sky Masterson as soon as we hear him sing; it’s as if we’re seeing that ‘hidden’ part of him that all lovers see in the object of their affection.

Harrison just about keeps up her end of the bargain although this isn’t the most convincing love affair you’ll see on stage. There’s something a bit awkward about Harrison’s transition from prim soul-saver to rum-swilling romantic and, whilst we enjoy watching Sarah and Sky’s romance we never quite believe it – and it doesn’t help that Harrison’s voice feels a little strained and thin compared to Parker’s effortlessly enchanting turn. It doesn’t matter too much, though, since the love story between Parker and the audience is really what lights up this show from within.

And then there is the comedy – for ‘Guys and Dolls’ is as much about laughing at love as it is about celebrating it. Sophie Thompson plays the put-upon Miss Adelaide, an ageing dancer who has been married to chancer and gambler Nathan Detroit (David Haig) for fourteen years. Thompson nearly steals the show and positively revels in an endless number of savvy quips; ‘Tell him I never want to talk to him again. And ask him to call me tomorrow.’ It might’ve all been a bit hammy – and Thompson’s habit of dropping her voice an octave with every gag does begin to wear – but there’s a lot of soul simmering behind Thompson’s showboating. By the time Adelaide’s second lament comes around, you can feel the audience longing to reach out and comfort her.

And so we gradually begin to fall in love with the no-hopers and the lost souls and the very message of this story – you can’t control who you fall for and aint that a bitch and a joy – begins to make itself heard in all of us. As the musical sweeps along, the gamblers and bad boys get the greatest melodies, the most impressive dance-moves and the funniest lines. By the time we reach ‘Luck Be A Lady Tonight’, all the gamblers are gathered in the sewers and it’s here that Acosta’s choreography really explodes (look as those lowsy lads KICK!) and Loesser’s melody intoxicates. All these components are taken up one more notch as Nathan and his (good)baddie-buds agree to attend Sarah’s prayer meeting and Nicely Nicely (Gavin Spokes) brings the house down with ‘Sit Down You’re Rockin’ the Boat’. This is a song so fail-safe – so injected with the joy that a little danger brings to all our lives – that it has an encore written into it. These musical bods have our number: and what a joy it is to be played with such exquisite skill.