'Fear and Misery of the Third Reich' review or 'Everybody needs good neighbours...' 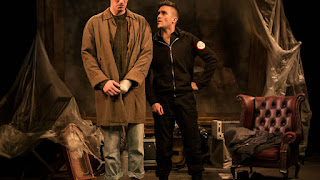 Bertolt Brecht's ‘Fear and Misery of the Third Reich’ is set in 1930s Germany but Phil Wilmott’s acute production feels icily relevant today. Actors speak in a range of accents, the swastika has been replaced with a symbol that reads TMRW (ie tomorrow) and Nick Corrall’s murky set is swamped with anachronistic props. As frightening as this might sound, Brecht’s classic 1938 play - which examines the local impact of a racially hateful dictatorship (Trump anyone?) – is one for our time.
Through a series of sharp vignettes, Brecht paints a picture of everyday life in Germany – and the personal betrayals that proliferate under Hitler’s regime. Two parents quickly unravel as they begin to suspect their son of turning them into the SA. Neighbours bicker as a butcher hangs himself with a sign – ‘I voted for Hitler’ – hanging around his neck. A petty fight ends with one SA officer secretly scratching a white cross on a young man’s back (played with haunting persuasion by Joshua Ruhle).
Wilmott keeps the tone erratic: absurd and shocking scenes rub up against each other, creating a constant sense of unease and dislocation. In one acidic encounter, Wilmott himself plays a judge caught in an impossible dilemma, as he struggles to please a deluge of corrupt leaders. Cracked laughter follows this awfully ambiguous line: ‘Justice is what serves the German people best.’
A smooth rhyming narrative (delivered with real authority by Joe Dowling) is thread between the scenes, as seductive as it is appalling. And throughout it all is the constant refrain of ‘Heil Hitler’, alternately laced with fear, irony, anger and exhaustion. Humanity might be making itself heard underneath those parroted cries but it is being flattened out with each croaked call.