'Grass' review or 'How does your garden grow?' 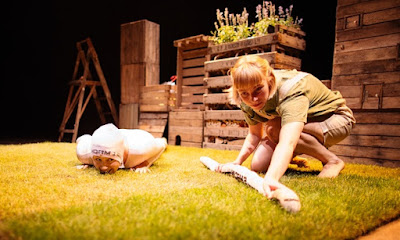 The air smells of soil and a sparkling green lawn fills the stage. Children are sat on little patches of grass, with their parents perched behind. A gentle voiceover coos – “Grass is everywhere: it covers 20% of the world” – and two performers begin a delicate dance. The lighting is dim, the music is soft and twinkly, and the dance moves are subtle and measured. Some of the children look entranced. Others look a little bored. Grass is a gently informative show about vegetation and insects; it won’t stun your children, but it might quietly teach them a thing or two.
Director Rosie Heafford’s show is aimed at children aged four and over, and many of those who have already started school seemed perfectly content. My five-year-old theatre companion, Rosa, loved the schoolroom vibe, and when the interactive moments arrived (“Can anyone name this insect?”), she stretched up her hand as high as humanly possible. But those children not yet in school, or less comfortable in a lesson environment, might grow restless.
The happy-clappy narrative gets a little bit jarring, and the show works best when the dancing takes centre stage. Helena Webb and Keir Patrick are thoughtful performers, and work hard to draw the audience in and help them connect. We learn about the resilience of the earthworm as Webb – dressed in a leotard and headband – ducks and weaves at Patrick’s side. A pair of bees perform a wiggly nectar dance (to James Marples and Amir Shoenfeld’s original music) and when two ants dance “to decide if they’re friends” – with disco lights flashing and music blaring – Rosa squeezes her eyes shut in excited delight.
But the pacing is odd: wildly upbeat scenes are followed by strangely sedate encounters. The narration, too, feels a little fractured. The vocabulary is erratic (do children know what a colony is?) and the facts are often rather obscure. By the time we’re told that Cleopatra and Darwin were great fans of worms, even Rosa – a keen learner – is a little bored and begins to vaguely pick at the pebbles that line Sarah Booth’s tidy set.
Grass is a brave but uneven effort. It’s also a little dry – perhaps it needs watering. After the show, the children are given tubs of mud and sand to play with, and the theatre fills with excited chatter; if only those barriers had been broken down a little earlier.