'Waiting For Godot' review 'All the world really is a bloomin stage'. 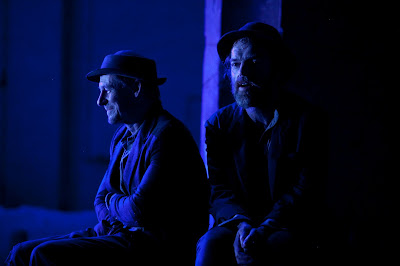 Academics have agonized about what ‘Waiting for Godot’ means but I will let you into a secret (so lucidly revealed in Andrew Upton’s superb production): ‘Godot’ is about absolutely everything. It is about whatever you might thinking, feeling or worrying about on the night of the performance.  The framework of ‘Godot’ is so loose, and yet the inner structuring so precise, that Beckett’s dazzling play can contain all the ideas we might pour into it. At its heart, Godot is simply the opportunity – and a provocation - to have a good old think about things.

Some Beckett productions try so hard to force an interpretation onto ‘Waiting for Godot’ that it grows stagnant. The worst productions are reduced merely to Beckett’s words -and what the director and actors fervently and anxiously hope those words might mean. This way disaster and exquisite boredom lies. But if Beckett is done right – and damn is it done brilliantly here – then it is about so much more than just the words. It becomes about all the ideas and fears that rise up in between those exchanges. Keep the performances, design and concept loose enough and there’s no end to the thoughts that can emerge in the gaps in between the words that make up ‘Waiting for Godot’.

Zsolt Khell’s design is strong yet flexible enough to allow the whole production to sing. The stage has been transformed into a concrete half-world. Crumbling remnants of fractured buildings create a faltering and semi-tangible backdrop, which feels like the remains of a world you’ve never seen but might have imagined. A huge iron arch frames the front of the stage; it’s a brutalist echo of the proscenium arch. And the tree? The tree is spindly trunk that crawls up the stage and out of sight. Again, it might remind you of a tree you once spotted somewhere and that lingers in the fuzzy edges of your brain, but it’s nothing that you can comfortably name or located. But it is definitely, definitely something.

There is this same half-recognisable state to all the performances. Vladimir (Hugo Weaving) and Estragon (Richard Roxburgh) wear faded suits and battered hats. They look like tramps who have raided an ancient props cupboard and are performers and people simultaneously. Roxburgh’s and Weaving’s delivery is sometimes self contained and real and – at other times - self-aware and outward-looking. Sometimes it feels like they are looking beyond the stage and sometimes they seem trapped completely. The inspired flexibility of these performances allows for some superb slippage throughout the production, which rips itself open – and allows us and our own thoughts in – and then just as quickly shuts down and presents a totally concealed world, with no exits and no way out.

It is this wriggle room – the refusal to clamp down on one particular meaning or approach – that makes this interpretation of ‘Godot’ such a profoundly moving and revealing experience.  It slips and slides along with our own muddled but excited reflections. The relationship between Vladmir and Estragon is never too clearly defined and, as a result, it represents all the relationships we’ve ever known. They are weary and life-long friends; they are mother and son, bickering siblings, affectionate lovers and even a man and his dog.

The Pozzo and Lucky scenes also shimmer with a purpose and significance that I have rarely witnessed. These sequences – which see Pozzo (Phillip Quast) stride on stage, with a knackered and over-burdened Lucky (Luke Mullins) attached by a rope – often feel a bit tricksy. The scenes are frequently overplayed and sometimes feel like a convenient counterpoint to Vladimir and Estragon’s relationship and a welcome relief from their ceaseless waiting – but, in Andrew’s show, Pozzo and Lucky are a complex and meaningful duo in their own right.

Quast is a cruel Pozzo but he never tips over into merciless. Again, there’s room to like or hate him according to our particular mindset at the time. Mullins’ Lucky is a ghostly creature – with his face chalky and frightening – but he is slightly defiant and sinister too. Their ‘drop-in’ scenes prompt a rush of contradicting thoughts in just a few minutes. The initial shock that we feel at Pozzo’s abuse of Lucky gradually ebbs away, as Vladmir and Estragon accept and even encourage their damaging double act. And the thought bubbles up: look how quickly we assimilate cruelty when those around us allow it! The mention of Lucky’s now-lost skills and life-force reminds us just how rapidly and unthinkingly we deplete our resources, on a personal and global level. At some points, the whole scenario felt like a massive fuck you to the developed world and the way we sit back and watch as the developing world sinks to its knees.

But then, when Lucky is finally forced to ‘think’ – and he unleashes that torrent of words that so often feels like a chore in less intelligent productions – the show nudges our thoughts in quite a different direction. Those tumbling words and shards of memories seem to be surging towards something quite definite. The speech takes on a shape that it so often sorely lacks and then, right in the middle, we get to the nub of the speech and – if we’d like to take it that way – the nub of this play. Lucky spits out the words ‘in spite’ and ‘man’ and ‘death’ in countless permutations and the way in which all the noise and clamour of life drowns out that inevitable end point  - death – blazes out for just an instant.

No doubt other people will have extracted other thoughts from this production and that really is the inimitable joy of Beckett done well; he allows you to think about the frightening and ‘forgotten’ stuff within the relative safety – or at least semi-recognisable structure – of a night at the theatre. He gives you permission to look into the darkness and does not offer hope or answers but does allow you to the time to look at things head on.  This is why you will not want the very best Beckett shows to end. Despite the consciously grinding repetition and Vladimir and Estragon’s desperate search for release , you will long to run in the opposite direction. Let this show go on forever! Let the night never dim. Let us to rest in this strange half-world for just a little longer, where we can contemplate death and even accept it, but safe in the knowledge that – tomorrow night and for decades and decades after – this life, this world that Beckett has created, will go on for eternity.