'Fowl Play' review or 'Does this float your boat?' 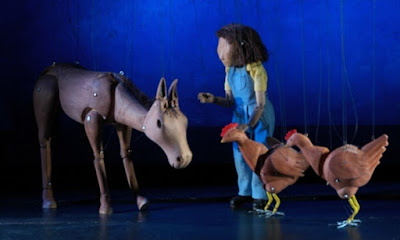 My young theatre companion, Blue, has barely been on a boat, so a boat with a puppet theatre inside just about blows her mind. The build up to our trip to the Puppet Theatre Barge is filled with excitable questions: what if the boat starts moving? And where do all the actors sleep? By the time the portholes are covered and a spooky darkness descends over our cabin-like venue, Blue is just about ready to pop. But Fowl Play, for all the beautiful craftsmanship on show, is a plodding affair. By the end of the show, my notepad – meant for my own scribbles – is filled with my frustrated goddaughter’s desperate doodles.
There’s little room to play with in this compact venue and it’s a tricky space in which to make an impact. The stage is very small and, in this steeply raked venue, the marionettes are quite remote. It doesn’t take long before Blue has placed her hands over her eyes, in a crafty attempt to make her own binoculars. She’s seriously struggling to connect.
Juliet Rogers, who wrote Fowl Play, also helped carve the marionettes that lightly clatter across the stage. They are exquisitely detailed and loose-limbed creations. The farmyard animals’ emotions are subtly expressed with just the wiggle of a fox’s tail or the drooping of a piglet’s ears. Gren Middleton’s hazy lighting lends a romantic sweep to the production and a few scenes gently dazzle. When two tiny birds flutter across a sun-streaked farm, a happy silence descends.
There’s no doubting the aesthetic beauty, or the skill on show, but the story drags and takes itself too seriously. Blue tries her hardest to get engaged but her attention drifts. It is a simple story at heart: a foal, who turns out to be a mule, is stolen from the farm, and his animal chums set out to rescue him. But there are countless diversions along the way, and emotional impact is lost as the show slows down to a gentle, aimless trot.
The voices have been prerecorded, which rinses the show of spontaneity. The recordings are also played at a strangely high volume and Blue spends much of the show with her hands clamped stubbornly over her ears. The only actor to add a little sparkle to proceedings is Stephanie Fayerman as the archly dismissive cat, who sounds like a pompous grandma who has had one too many gin and tonics.
Fowl Play ends with a talent show which boasts a tap-dancing mule and some gymnastic pigs, but it’s too late to pull the audience back. I’m kicked from the front and from behind by restless little feet. It’s a shame that the liveliest performances come from the children around me rather than the gorgeous but slightly gloomy stage.