'All That Fall' review or 'Does the rocking ever stop?' 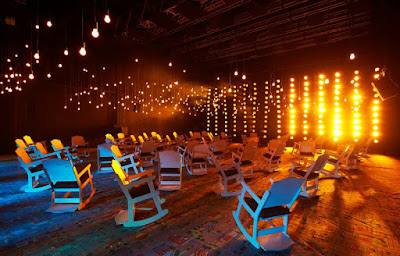 A few too many bells and tassles on this Beckett for my liking. ‘All That Fall’ was originally a radio play and Pan Pan Theatre have tried to replicate this original listening experiencing but also layered on a lot of embellishments of their own. It feels a bit too directive for this haunting and free-falling piece of theatre.

We enter a pitch black room, with little tear-drop light bulbs – lit dimly – hanging from above. In front of us stands a lattice of exposed lights, as if the lighting rig has been placed centre stage; they will be our performers for the night, rather than the actors whose voices are heard but bodies never seen. The stalls have been replaced with rocking chairs and on each rocking chair sits a black cushion, decorated with a picture of a skull. Before a word is spoken the scene has been very firmly set: this is a halfway chamber, somewhere between life and death, with that final light (don’t step into it!) lingering brightly on the horizon.

But the very fact that all these ideas are so accessible and physically writ large on this production takes something away from the creeping impact of Beckett’s work. It feels a tad forced, as if a teacher is quietly whispering the sub-text in our ears, as we patiently try to let Beckett’s oozing text overwhelm us. The rocking chairs can also be terribly distracting. On Thursday night, the woman in front of me rocked ceaselessly throughout the entire bloody show. There’s nothing worse than being forced to watch ‘All That Fall’, set to someone else’s rhythm.

But there are some sumptuous moments that hit with such force. The sheet of lights at the front of the stage proves particularly effective. As Mrs Rooney (voiced with dripping cynicism by Aine Mhuiri) traipses through the village, human nature clipping at her heels, those shining headlights – which flare up in various patterns throughout Mrs Rooney’s journey – begin to take on meaning. They are humanity. They are the cruel vagaries of fortune, which light up some people’s lives and leave others in the dark – but will extinguish us all in the end.

Some brilliant undertones are also teased out, thanks to decision to perform ‘All That Fall’ with the actors off-stage The sound effects really come into force. Every time Mrs Rooney clambers in or out of a car, all that panting and groaning sounds a little bit like sex. Sometimes it sounds like a death rattle. This is brilliant touch, which reminds us that all those noises folded into Beckett’s text are not mere extras but another life tapestry, another story, woven in between the more obvious words that conceal the deeper patterns and truths that lie beneath them.