Written for The Guardian Stage 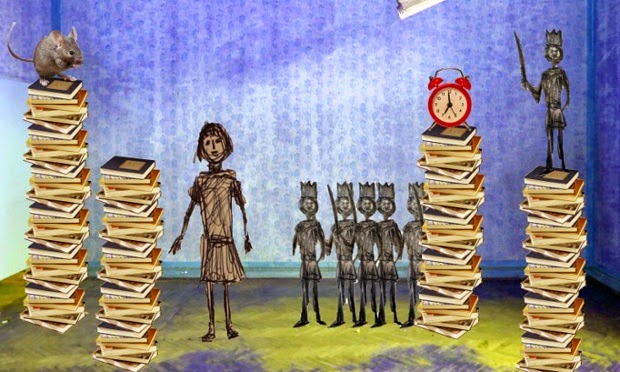 The theatre company Forced Entertainment are about to perform an early version of their first children’s show, The Possible Impossible House, which opens at the Barbican later this month. Robin Arthur, one of the company’s core members, is clutching a few scraps of cardboard and looking a little anxious. The kids are going to arrive at any moment. Arthur holds up the cardboard and a bright red feather is projected against it. It looks like the feather is hovering in mid-air. Another scrap of cardboard is held aloft and doors, dogs and marching soldiers are summoned into life. This is classic Forced Entertainment territory: messy, a little bit mad and strangely enchanting.
The six-strong company are celebrating their 30th anniversary this year (they formed shortly after graduating from Exeter University) and they’re marking the occasion in suitably eclectic fashion. There have been revivals of classic productions, including a 24-hour live stream of the durational show Quizoola (in which they improvise responses to more than 2,000 questions, both banal and profound) and a six-hour live stream of Speak Bitterness, described by artistic director Tim Etchells as a “catalogue of confessions”. The company has restaged their fairy-tale epic The Last Adventures and their kids show for adults, That Night Follows Day. They have also created a new show, The Notebook, a harrowing adaptation of Hungarian writer Ágota Kristóf’s wartime novel.
It isn’t the type of back catalogue that screams “children’s theatre”, but that’s the point. For the past few years, the Barbican has been commissioning “adult” companies, such as Slung Low and Told by an Idiot, to make Christmas family shows. Now it is Forced Entertainment’s turn and, as Arthur wryly comments after the run-through, “it’s a walk in the dark for us”.
Forced Entertainment are known for their playful approach to devising their work, which essentially involves installing themselves in a rehearsal room, with just a few props and ideas, and refusing to leave until something happens. That rehearsal process, which Etchells once likened to “playing with a child, using different toys”, has changed very little over the years. Forced Entertainment began devising Possible Impossible with just a few fragments in mind. “The starting point was two things, really,” reflects Etchells. “One was the idea of a location, a house where very strange things could happen. We knew that much. And the second thing was working with [the visual designer] Vlatka Horvat and incorporating her images and collages into the show.”
Etchells, a visual artist himself – he is this year’s Artist of the City, Lisbon, and contributed to the Hayward’s exhibition “Mirror City” – has collaborated with Horvat for a number of years. “There was a flavour about Vlatka’s work that we found interesting,” he says. “It had this sense of worlds meeting. Vlatka’s work has often been about photographic collage and here, in this show, it has become about that meeting between drawings and doodles and photos and story-telling.”
The Possible Impossible House follows Horvat’s doodled girl around a strange house one night as she encounters creatures including a talking mouse, a philosophical spider and a friendly ghost. There is something about the combination of Horvat’s scrappy doodles and stark projected photos that seems typical of Forced Entertainment, whose shows tend to feel naive yet sophisticated, chaotic but clinical, make-believe but unmistakably truthful.
The company initially thought they might draw inspiration from their 2009 show,Void Story, in which a couple of actors describe a journey through a crumbling cityscape, aided by vivid cinematic projections and a frenetic sound track. Perhaps unsurprisingly, Etchells soon realised this “bleak fairytale”, which takes place on a “night so intense that there are no stars to be seen”, was perhaps not the best starting point. “We knew we needed to be more lively and more direct,” he says.
The aesthetics had to be different, too. “Showing your images on bits of torn-up cardboard isn’t really to be recommended in all sorts of ways,” explains Arthur with a nervous chuckle. “But when it works it is much more powerful than something pristine and polished.”
Etchells picks up on Arthur’s train of thought. “We knew we were on to something as soon as we moved [away] from full-screen projections … Suddenly the performers were in a much more intimate space. I was talking to the kids just now and they said” – Etchells adopts his best awed whisper – “The cardboard, it’s really quite magical!”