'The Merchant of Venice' review or 'Who wants to put on a show?' 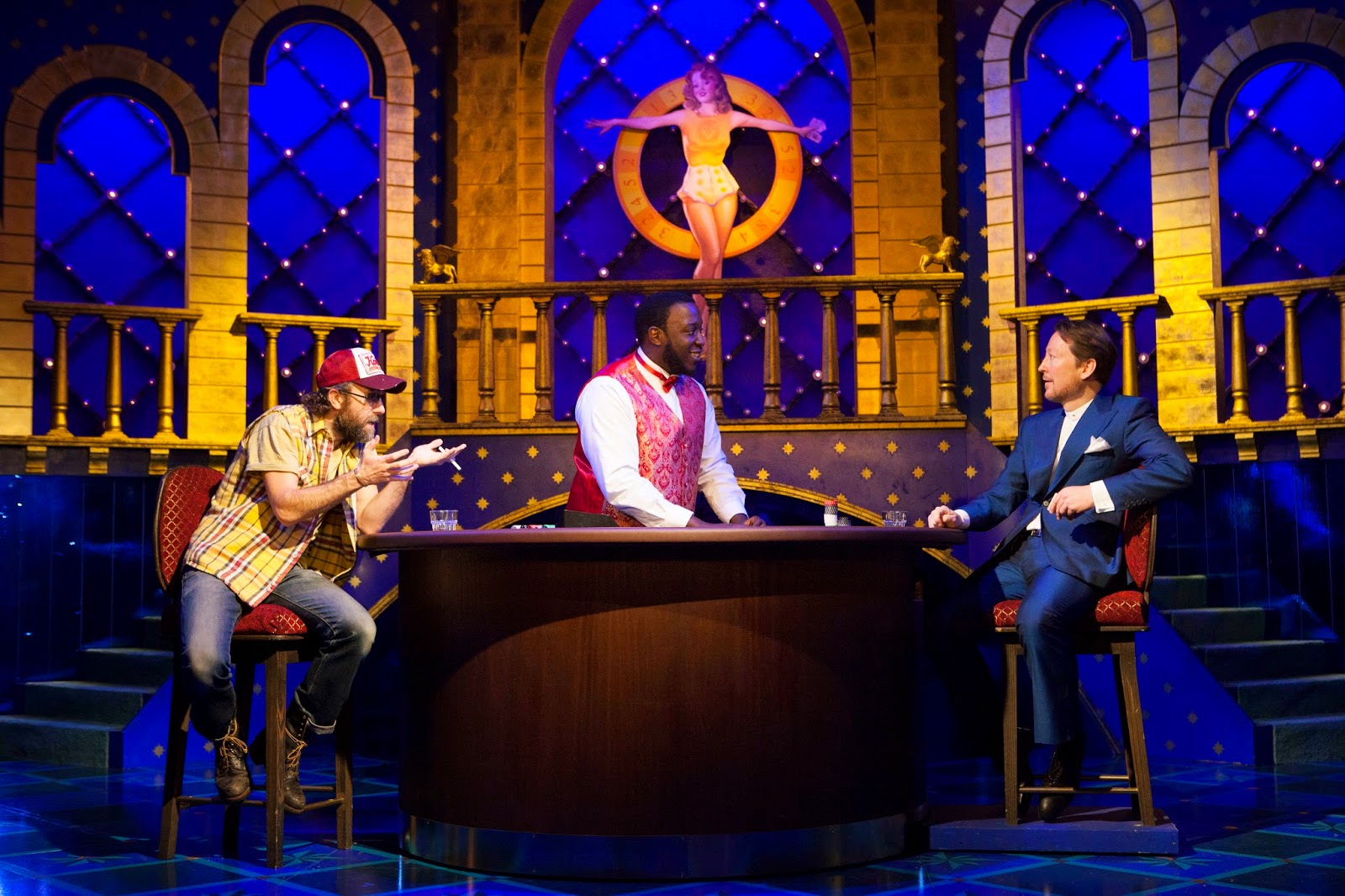 Ah, Rupert Goold! You’ve got to love him – or hate him – or mostly do both at the same time. Goold’s ‘Merchant of Venice’, first staged in Stratford and starring Patrick Stewart, has now crash landed at the Almeida Theatre, with Ian McDiarmid in the title role, and it’s one heck of a lively production. Goold’s ‘Venice’ is set amidst the empty glitter of Las Vegas and involves a crooning Elvis impersonator, a tacky reality TV show, some rowdy dance numbers and a brutal showdown between Shylock and Antonio. Some scenes are so brilliant you want to reach over and give Goold a hearty slap on the back - and some scenes are so bad you want to bash him around the chops.

‘The Merchant of Venice’ is one of Shakespeare’s most problematic of problem plays, with a bunch of characters that are very hard to like, a number of bonkers conceits that are tough to endure, an ending that spirals on forever and a nagging stench of anti-semitism that stinks no matter how you play it. Yet the funny thing is that for much of Goold’s production, ‘The Merchant of Venice’ doesn’t feel remotely like a problem play. In fact, it mainly feels like a lot of good fun.

Tom Scott’s set is a typically bold and boisterous canvas, with some subtle little details woven into the edges. The stage space has been transformed into giant casino, gold and purple and gleaming with the kind of brightness that looks just seconds away from fading. This is a showman’s town and most of the characters seem comfortable with such flashy surroundings. It is a world where women are treated as play-things and money is turned into a game. In many senses, it's the ideal setting for Shakespeare’s ‘problem’ play.

The biggest twist of the first half is that the sub-plot involving Portia and her suitors has been framed within a tacky reality TV show, ‘Destiny’. The idea works brilliantly. This sub-plot, in which Portia’s suitors have to pick the right casket if they are to win her hand in marriage, has always been exceedingly tricky to pull off. Here, the suitor scenario feels fake and forced for a very good reason and all that odd posturing, not to mention the rampant objectification of women, suddenly makes sense. Susannah Fielding – the knock out actor in this production – sits at the sofa and waves robotically at her TV audience and potential suitors, a fixed but fading smile on her face. With each new suitor Portia changes her dress, a subtle reminder of the way in which women instinctively alter their appearances in the hope of complementing (and receiving compliments from) the men around them.

It all feels a bit Hunger Games, as Portia plays the role that the public demands of her. It is also very, very funny. As the various suitors – Prince of Morocco, Prince of Aragon and finally Bassanio – hum and haw over the cryptic clues that accompany each casket, Shakespeare’s slightly stiff conceit is brilliantly liberated. It is such a clever touch from Goold, which finds a real and current comedy in Shakespeare’s text, whilst also affectionately poking fun at his writing.

Rather than shy away from the stranger parts in ‘Merchant of Venice’, Goold tackles them head on – and you have to admire him for this. Any oddity is highlighted and made infinitely more bizarre, rather than sneakily shoved under the carpet. However, this kind of approach does have its problems. For starters, the constant embellishments (let’s highlight Lancelot’s struggle by using sexy good and bad angels!) really break up the rhythm of the piece and make it very tricky for the audience to familiarise themselves with the big ideas, big characters and big moments. When absolutely everything feels monumental (let’s stage that transition scene between Salerio and Gratiano in a lift and keep piling in characters and also put some blinking music in there!) it becomes harder and harder to really grasp what the Bard is banging on about. Each scene feels hugely significant which, oddly, starts to take away from the overall impact of the play.

This focus on the smaller moments also means that Shylock – played by Ian McDiarmid – doesn’t make a huge impression. Perhaps that is OK. Perhaps the best way to get around the cruel treatment of Shylock in this play is to edge him out of the action altogether,   but I can’t help feeling that some of the thundering power – no matter how awful and complicated that power might be – is lost if one lets Shylock wriggle away from the spotlight.

Having said that, Shylock is depicted as smaller, quieter and less showy than those around him for good reason. Here is a man who, despite his flashy tie, refuses to play the showman; a man who would rather make people strain to hear him than fit in with the crowd. So, there is some sense behind making McDiarmid quieter (and less American) than everyone else – but he’s very hard to hear and lots of the speeches slide away from him. There are just a few moments when this slightly garbled delivery works perfectly. The best scene is just after Shylock’s daughter has run off with a Christian. McDiarmid stumbles into a bleak Vegas canteen and sits alone. He struggles with a little packet of sugar and spills coffee all over himself. He looks like a small man in a great and glistening world that does not need or want him. When Shylock quietly mutters, ‘If you prick us, do we not bleed...’, it is the sad mumblings of a man who has long since given up on expecting an audience.

It is a subtle moment, which gets to the heart of Shylock – but that interpretation is all but forgotten in the courtroom confrontation between Shylock and his debtor, Anthonio. In fact, everything about this production suddenly feels out of whack as the play shifts into much darker terrain. The characters transform in ways unimaginable and the plot-lines reach a pitch that feels at odds with the rest of the show.

Shylock transforms into a caricature villain. He dons purple tinged glasses and carefully draws marks on Antonia’s bare chest, as he prepares to extract his pound of flesh. He snivels and licks his lips and, later, when he is banished, scuttles from the court like a snake. I have no idea where this man has come from. The same goes for Portia who suddenly discovers the most extraordinary eloquence in her role as lawyer. She also becomes exceptionally cruel, as she waits until the very last moment – just as Shylock’s sharp knife hovers over Antonio’s skin – to bring a halt to the proceedings. Where did this calculated creature come from? The rest of the ensemble, fairly innocuous until this point, turn on Shylock with unbridled malice. They push him to the floor and spit on his face. Where did they come from? Such questions will always emerge in productions of ‘Merchant of Venice’ – it is such a tough play to get right – but these doubts feel particularly strong in this case. There are flashes of brilliance here and some of the smaller problems about this play are handled with such skill – it’s just the big picture that hangs a little awkwardly.