'These Shining Lives' review or 'This is the sound of a critic's patience snapping!' 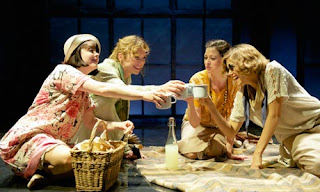 What was once a crummy office building next to Finsbury Park station has been transformed into a classy 200-seat theatre, replete with a 90 seat studio space and snazzy bar. There's even a company dog roaming about the place. The only thing lacking a little pizazz, at Jez Bond's brand new Park Theatre, is the programming.

Still, what chutzpah it must've taken to get this project off the ground! The venue has been thoughtfully designed. The thrust stage reminds one of a studio space, but the stall and circle level seating add a little grandeur. It feels like a particularly posh fringe theatre.

The glamorous cast, which includes Charity Wakefield and Honeysuckle Weeks, is the main draw here. Melanie Marnich's play, 'These Shining Lives' – receiving its UK premier – is sound but rarely surprising.

Set in Chicago in the 'roaring' 20s, Loveday Ingram's composed production rumbles rather than roars. Charity Wakefield plays young Catherine Donohue, delighted to get her first job at Radium Dial Company, Independent. Her task is to paint watches. She quickly makes friends with her colleagues, including the initially gruff Charlotte (Weeks), and everything runs like clockwork. That is, until the girls get sick – so sick, they start to glow in the dark.

It is a shocking story - but one can see the shocks coming a mile off, thanks to Marnich's formal structuring. The most fluid scenes are between the delicately determined Catherine (Wakefield) and her besotted husband, Tom (Alec Newman). Marnich's romantic lyricism ('this girl looks like an answered prayer') works beautifully in these gentle encounters.

But matters feel more mechanical elsewhere and Wakefield is lumbered with a cumbersome running narrative. The audience is held by the hand every step of the way: characters are systematically introduced and scenes explicitly linked together. Even moments of great tragedy are spelt out to us: 'This is the sound of a mother's heartbreaking!'

Yet this remains an involving and important story, performed with charm and grace. One leaves the theatre feeling satisfied if not profoundly stirred.