'Venus/Mars' review or 'Inner turmoil and a dancing trumpeter.' 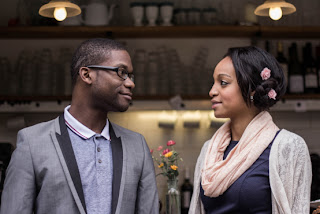 There is a heartfelt earnestness to Patrice Etienne's new play, 'Venus/Mars', which makes it a hard show to hate. But there is also a whiff of naïve pretension to this production, directed by Rikki Henry (ex-assistant director at the Young Vic), which makes it very hard to love.

'Venus/Mars’ is a straightforward love story with a lyrical sheen and a London backdrop. Using two interweaving monologues, Etienne tracks the highs and lows of young love. We witness Daniel and Michelle's first meeting, first kiss, first shag and so on. If anything, the script is a touch too simple. Conversely, Rikki Henry's heavily symbolic direction feels overly complicated.

Light bulbs flash at suggestive moments, roles are reversed and clothes violently shed. The most bizarre touch of all is a mute trumpeter (Jill Cardo), who acts out the lovers' inner turmoil, writhing about in silent agony. It all feels a bit silly. So, too, does the scene in which a heartbroken Daniel (Adrian Decosta) sits beneath a spray hose and is gradually soaked to the skin.

Samantha Pearl is a spirited actress but struggles to make an impact against the flashing lights and dancing trumpeter. Decosta has more luck as the cocksure, closet mummy's boy Daniel and his comic asides ('I promise I won't bite. Lies!') provide some much needed light relief.