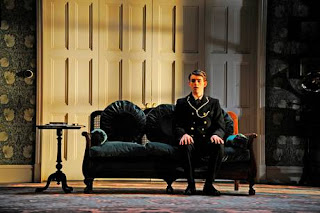 We might feel under the thumb of the government today - particularly in light of the Chancellor's recent budget - but it used to be much worse. Preceding a seminal law case in the early 20th Century, British citizens were not permitted to sue the monarch or government. The little man had no right of reply.

But then, in 1908, a young cadet was accused of stealing a 5 shilling postal order and unceremoniously chucked out of the Royal Naval College. The boy was branded a thief and his reputation sullied for good. Enter stage left the young lad's father, who decided to take on the might of The Admiralty and 'let right be done'.

This is the stuff of a playwright's dreams and Rattigan handles the subject with such elegant wit  in his 1946 play, 'The Winslow Boy'. All the action unfolds in the living room of the accused Ronnie Winslow and his stern father, Arthur Winslow (Henry Goodman). This domestic focus reminds us that it is at home where our 'grand' moral choices are felt most strongly.

Big ideas rumble delicately throughout but the production is entertaining first, erudite second. With Henry Goodman and Deborah Findlay cast as Ronnie's father and mother, there's a comic twinkle to almost every scene. But there's also real sincerity and a gravelly resolve to Goodman's performance. When Ronnie's expulsion is revealed it is only Goodman's Arthur who keeps his head held aloft, determined to look his son's accusers directly in the eye.

Director Lindsay Posner keeps things skipping along at a nice easy pace, oiling the humour and airing the weightier themes. Although Goodman and Findlay glue the show together, Peter Sullivan is the standout star as the devilishly talented lawyer Sir William Morton. When Morton rips young Ronnie to shreds with a lacerating interrogation, you don't know whether to kiss or kick him. Not unlike the British law itself, he is the villain and hero of this sumptuously satisfying play.