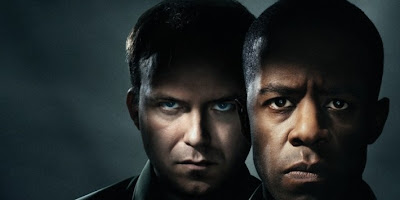 In Nicolas Hytner's modern-dress production, Adrian Lester's Othello hides in a toilet stall, wears washed-out army fatigues and sleeps in a bedroom that has the distinctly crappy whiff of a sixth from common room. There's not a whisper of magic about him. His wife, Desdemona (Olivia Vinall), spends a lot of time in tracksuit bottoms and frankly looks a bit scruffy. She is not exquisitely alluring. Cyprus, in which our tragic couple resides for the majority of this play, is not a place of distracting exoticism. It is a nondescript army camp, sparse and beige. This is a distinctly ordinary world. This is Iago's world.

Vicki Mortimer's wilfully banal set, with its bleak courtyards, mahogany board rooms and soulless army digs, provides the perfect camouflage for Rory Kinnear's Iago. He is a soldier amongst hundreds of other soldiers. He is anonymous and forgettable. Like so many psychopaths, one does not see Kinnear's Iago until it is much too late.

Somehow – and god knows how – Kinnear manages to be compelling yet invisible at the same time. One spends the whole time watching him and yet, in some scenes, one realises with a start that he is hiding in the corner, overlooked and unchecked. Kinnear's Iago is able to disappear in plain sight. He stands, frozen, his eyes the only thing still moving. It is if he is channelling every last ounce of energy into analysing these sorry schmucks around him and figuring out how to turn their every word against them.

It is this anonymity that allows Iago to manipulate Othello et all so brazenly, without ever being suspected. Even the most bombastic of lines sound ordinary coming out of this everyman's mouth; 'Do it not with poison; strangle her in her bed, even the bed she hath contaminated.' Such a statement! And yet it passes from Iago's mouth almost unnoticed. By sheer will and self-negation, Iago shrouds red-blood statements in an obfuscating grey.

Kinnear also makes perfect sense of Iago's motives – or lack thereof. Scholars have tussled so hard with this one question: why does Iago set out to bring down Othello and Desdemona? But, with Kinnear's Iago, the 'why' is not necessary. This is a psychopath: he kills for the joy of killing. Even more chilling, the murder itself is an afterthought. Kinnear's Iago thrives off the scheming alone. It is the manipulation, rather than the outcome of that manipulation, that Kinnear's Iago most palpably enjoys. Iago's exclamation when he fathoms a way to gull Cassio – 'Aaaaaaah, I have't!' - is almost orgasmic.

In his love of scheming, Kinnear's Iago could be described as Hamlet turned inside out. One certainly feels this twisted similarity when Iago cries out, 'Ay, that's the way/ Dull not device by coldness and delay!' Whereas the end point – murder – prevents Hamlet from acting, it is the action itself that Iago embraces. He performs speedily merely so he can get to next part of his plan.

The ghost of Richard III also hovers about this Iago. Hytner's production is so lucid and so stimulating that these connections – wrenched out of us at school and university – materialise unobtrusively, thrillingly, throughout the show. Iago's boast about Cassio's imminent downfall - 'With as little web as this will I ensnare as great a fly as Cassio' – chimes with Richard IIIs gleeful cry, 'Was ever a woman in this humour woo'd?' Both Iago and Richard relish stepping back from the moment and marvelling at their scheming. Both would perhaps give up the end result, if only their evil could be appreciated in the here and now.
There's a brilliant moment when Iago's wife ruminates about Othello's nemesis; 'The moor's abused by some most villainous knave, Some base notorious knave, some scurvy fellow.' At the word 'base', Kinnear's Iago tuts involuntarily, deeply pained by such an accusation. This is an Iago who craves recognition and respect; a man who would rather be called an evil genius, than not called anything at all.