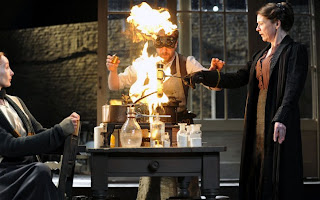 'Children of the Sun' might end with a blazing fire but this production lacks heat. Gorky wrote 'Children' whilst imprisoned in 1905 and that stultifying atmosphere has bled over into his play. Very little happens. Moreover, very little happens, very slowly to very trying characters. Howard Davies' hands-off directing and Upton's flat adaptation only further dampens this production.

The Russian revolution might be rumbling on the horizon but its dangerous energy isn't felt here. Instead, the action - or what little action there is - unfolds in its entirety in the house of middle class scientist, Protasov, and his long-suffering family and friends.

Protasov (Geoffrey Streatfield) is a man of fairly explicit contradictions; one who studies Chemistry because it 'sees everything' and yet one who is blind to the suffering of those around him. And what a lot of drawn-out suffering there is! Protasov's sister, Liza (Emma Lowndes), is on the verge of full-blown depression and his feisty wife, Yelena (Justine Mitchell), battles daily merely to have a conversation with her self-absorbed spouse.

A little light relief comes in the form of suicidal widow and Protasov-worshipper, Melaniya (Lucy Black). This is a lady who borrows reams of books from Protasov, only to lick them rather than learn from them. Paul Higgins also generates some warmth as Melaniya's brother, Boris, who is equally devoted to the depressed Liza. That the most sympathetic character is also one who now sees the entire human race as 'detestable' tells you just how cool, how lacking in love and surprises, this play is.

Bunny Christie's expansive yet detailed set only emphasizes the lifeless feel of this show. There are endless spaces, rooms and corridors on-stage and yet the action rarely ventures beyond the central kitchen, where the characters hash out their loveless relationships and hackneyed debates. That staleness is perhaps the point, since this play explores a section of society in terminal decline. But it makes for one heck of a dry production.