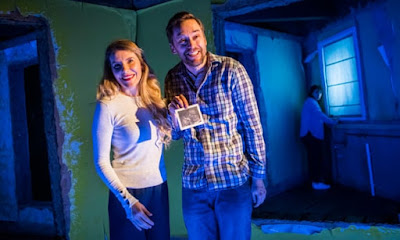 Dilapidated walls fill the stage, with great big holes puncturing the middle of each to create framed spaces. It looks like the beginning of things or the end: a family home in the process of creation or, perhaps, destruction. This is the backdrop for Kellie Smith’s new play, which examines the way in which a parents’ relationship frames family life, creating safe boundaries – or crushing limits – for the people inside.
Lucy Sierra’s dramatic set creates a gloomy, heightened effect, which director Anna Ledwich maintains with flickering lights, a surging soundscape and looming shadows. It initially looks great but it all gets a bit much and overplays what is a fairly straightforward family drama.
Smith writes best when she keeps things low-key. The early banter between recently separated Joe (Finlay Robertson) and his glossy new girlfriend Stephanie (Allison McKenzie) is light, fun and effortlessly believable. Smith is excellent at observing the smaller moments in life: the way “I love you” might slip out at the beginning of the relationship, or Stephanie’s aghast reaction when she realises Joe’s ex-partner has unexpectedly materialised (“Did she see me? My hair!”)
It’s when things get heavy – and things get very heavy – that Smith’s play stutters and splinters. Natalie Klamar, as Joe’s ex Anne, spends a lot of time chatting manically to her off stage son, represented by pulsing lights. She’s an erratic and oddly unsympathetic character; a disappointingly warped impression of a single mum. Joe, too, ricochets between extreme emotional states and character traits. They’re both frankly terrible parents – brittle, unlikable and, as the plot tumbles towards to a dramatic close, hard to believe in.