'The Crucible' review or 'Stirring things up.'

The Crucible, Arthur Miller
The Yard, 2nd April 2019
Written for The Guardian 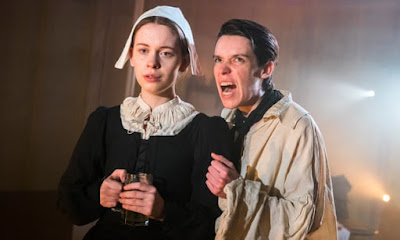 Arthur Miller’s The Crucible might not sound like risky programming but, for the Yard’s artistic director Jay Miller, it is. Miller has built his theatre’s reputation on staging subtle and theatrically playful new works such as This Beautiful Future and The Mikvah Project. This is his first reworking of a classic. It’s a lively and disorientating production, which certainly gets you rethinking The Crucible, if not feeling as intensely as you might hope.
The supposed big twist in this production is that John Proctor – the man caught up in the Salem witch trials – is played by an actress, Caoilfhionn Dunne. In reality, this is one of the show’s least obtrusive aspects. Dunne is a beautifully persuasive John who occasionally erupts with rage but is also gentle, subtle and sarcastic. When he is ordered to recite the Ten Commandments, Dunne delivers them with eyes rolling and a voice dripping with irony.
Dunne’s John and Emma D’Arcy’s Elizabeth Proctor share a tender chemistry, which warms up a show that sometimes feels too calculated. D’Arcy also plays one of the agitating locals in a clever doubling that reminds us that we all carry aspects of other characters inside. Jack Holden’s Reverend John Hale is light, forgiving and even hopeful; Jacob James Beswick’s Judge is brittle, camp, and frightening; and while Nina Cassells’ Abigail Williams is cruel and calculating, she’s also young, vulnerable and lonely.
The surprising new character traits are a joy to discover, but some of the play’s potency is lost in Miller’s constant quest for novelty. Costumes and accents are changed drastically from scene to scene. Cécile Trémolières’ clean-lined set is compromised by an obsessive use of screens, too big to ignore but too small to make an impact. Spooky masked figures stalk the stage, hefty microphones are held like trophies and we’re frequently dazzled by white-hot flashes of light. Miller simply refuses to let the play settle. It’s great fun but it’s also frustrating. With each press of the reset button, the play has to start again and try, in vain, to capture its audience.