'Stop and Search' review or 'Stop and start. And stop again. ' 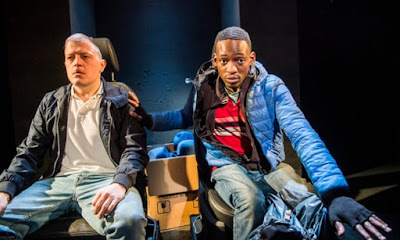 The title is misleading: this isn’t really a play about police searches, although a couple of coppers do pop up. Actually, there are a fair few misleading elements in Irish-Nigerian Gabriel Gbadamosi’s oblique new work. Three crisscrossing stories kick off in a car speeding towards Calais, and end abruptly in a taxi winding through south London. An African refugee bookends the play and a ghostly presence lurks at the scenes’ edges. But there are too many layers of obscurity and the intrigue gives way to frustration.
Director Mehmet Ergen eventually loses control of Gbadamosi’s writing but the opening scene is eerie and unsettling. Two car seats, which might have been neatly thrown from a crash, sit on Eleanor Bull’s gravel-strewn set. An angry white man, Tel (Shaun Mason, set to blow), and an African refugee, Akim (Munashe Chirisa), are driving through a tunnel, the world pressing down on them. Tel rages about his life, while Akim remains still and quiet. Every once in a while, Akim remembers refugees drowning and loved ones in flames. These are the memories that stay with Akim, wherever he goes.
In a baffling middle section, entitled Good Cop Bad Cop, David Kirkbride and Tyler Luke Cunningham play two sergeants – one restless and one calm – waiting for a criminal to return home. Kirkbride has a sinister energy about him but the scene falls flat. Gbadamosi’s writing keeps snagging on eclectic details: one of the cops is transgender and another has prostate issues. All very interesting, perhaps, but in a play this obscure it is mostly just distracting.
The final scene unfolds in a taxi, with Akim now in the driver’s seat. Connections emerge between all three encounters but it feels a little laboured. Far too much energy is spent teasing us about who might be speaking and how the different characters are connected, rather than really grappling with what this play is trying to say. Despite all this, there is a strange wisdom about Chirisa’s quietly composed Akim. Here is a man who has seen more than we could ever imagine: here is the man we should be listening to.