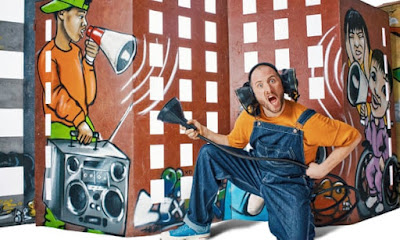 Oily Cart barely miss a beat in Hippity Hop, a sensory theatrical party for children aged two to five. This isn’t your bog-standard gentle introduction to theatre. Instead, every second is packed with singing, dancing, rap and rhyme. It can be a little overwhelming at first, especially for the more timid kids (and adults). But this is an infectiously immersive affair that encourages the children to lean into theatre and dance to their own beat.


The show is set in Hip Hop Town, which designer Marcello Chiarenza has filled with model buildings plastered in vibrant graffiti. Oli Polidore Perrins (AKA MC Solocypher) is the show’s pied piper and, backed by Kadialy Kouyate on the kora (a West African string instrument) and original music from hip-hop artist Breis, MC Solocypher leads the kids in a merry dance. Solocypher is also a teacher and, with quirky support from Katherine Vernez Gray, he manages to create a show that feels spontaneous and cheeky but always in control.
Writer Tim Webb has woven in a story about a runaway pram, but it’s really just a hook on which to hang a series of sparky musical performances. Each skit explores a different sense: sight, hearing, touch and smell. At the Sound Shop, the kids bark out animal noises into a sound catcher; at the Cloth Shop they scream out rap rhymes as they’re draped in fabric; at the Scent Shop they smell perfumes while (naturally) a puppet break-dances and sings; finally, we arrive at the Light Shop. A hall of mirrors is revealed and the kids scramble forward, eager to see themselves in a bold new light.