'Goldilocks and The Three Bears' review or 'Bears, borrowers, blues and banter.' 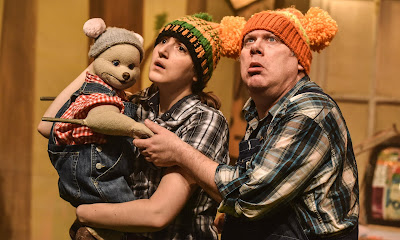 We’re deep in the woods and inside the three bears’ home, which is dappled in golden sunlight. The walls are adorned with quirky scraps salvaged from the forest: a shiny cheese grater, a large wooden wheel and endless knick-knacks. Hiccup Theatrehas reimagined Goldilocks from the bears’ perspective in a show for the over-threes that is neither too big nor too small but just right.


Almost everything in Sam Wilde’s beautiful set has been recycled. There are blankets made out of crisp packets and branches from the local scrapheap. There’s a bucket shower that spews blue tissue paper, a magical tea-making machine and a string of lampshades controlled by a bike pump. Every last detail has been designed with care.
Director Sarah Brigham staged Hiccup’s The Gingerbread Man at Derby last year and she has a knack for creating warm and whimsical children’s theatre. Ivan Stott’s compositions are lively and eclectic, with nods to country and western and Irish folk music. Stott also plays the chief storyteller and Daddy Bear, and engages naturally with the young audience. It’s only when he pulls out a double bass and the three-strong cast sing a soft blues number that you realise just how committed this company is to gently pushing at the boundaries of children’s theatre.
There’s a slight dip when the story strays away from Mummy Bear and Daddy Bear and their fluffy puppet son, and rests instead on Goldilocks. Katie Tranter is good fun as a stroppy Goldilocks but the bears are the heart of this show and it cools without them. Yet this remains a captivating production, one that pulls in the children and makes them feel utterly at home in the theatre.