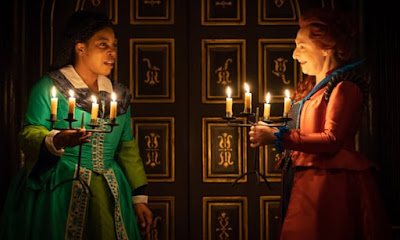 When asked why she decided to make Doctor Faustus and Mephistopheles female, director Paulette Randall responded: “Why not?” It’s a gleefully irreverent response, which seems to have liberated the cast and unlocked the humour nestling in Marlowe’s lofty classic. Jocelyn Jee Esien and Pauline McLynn share a freewheeling comic chemistry that lifts the play and lights up the audience, and the swaggering ensemble seize their comedy cameos with gusto. This tale of eternal damnation is a hell of a lot of fun.
Libby Watson’s streamlined period costumes and Joseph Roberts’ elegant court music initially feel understated and a little conventional. But as soon as Faustus makes a pact with the devil, selling her soul in return for absolute knowledge and magical powers, things turn funky. McLynn’s Mephistopheles sweeps on to the stage with fiery hair and a flowing red coat, her mischievous eyes flashing in the candlelight. The two set about causing havoc: they pluck jewels from thin air, bamboozle the pope and tease the audience. Firecrackers flare, Faustus’s leg is ripped clean off and Esien’s throaty cackle booms about the theatre.
As Faustus’s time on Earth shortens, the show darkens and Lucifer – a black-masked and sinuously ominous Jay Villiers – begins to stalk the stage. The dance of the Seven Deadly Sins is inspired by the Condomblé ceremony in Brazil and is chilling, with its macabre costumes and fierce dancing. Faustus and the audience are distracted and seduced at every turn. When the final reckoning comes, none of us see it coming. That great cackle catches in Faustus’s throat as she glimpses hell for the first time and the darkness, finally, touches us all.