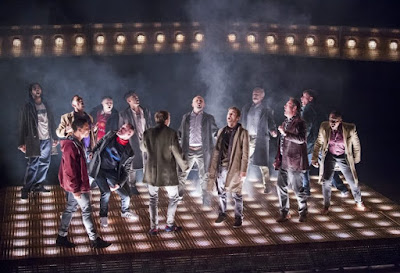 A father stands, frozen, inside a doorframe. Will he stay or will he go? A fireman stands halfway up a ladder, clinging on for dear life. Is this fireman brave – facing up to his fear yet continuing to climb anyway – or is he a coward? A huge chorus of men crowd the stage and scream: “A lot I’d like to know!” But will this wall of sound get these men closer to their fathers or will it push them further away?
Fatherland, a co-production between LIFT, the Lyric Hammersmith, Frantic Assembly, the Royal Exchange, and the Manchester International Festival (where it premiered last year), is a bleedingly theatrical and heartfelt piece about the clashing impulses that lie at the heart of the relationship between a father and his son (there’s a nod to daughters, but this is absolutely a male-focussed exploration; there’s not a single actress on a stage often swamped by actors). It’s about the gulf between what a father feels for his son and the words he might find (or not find) to express these feelings. It’s about moving on, while also longing to return home. It’s about the impossibility of out-running the father who now lives inside you – but the desire to give it a damn good shot all the same.
This bullish, gentle, broken, blazing show is a co-creation between playwright Simon Stephens, Frantic Assembly’s Scott Graham (who directs with a brilliant sort of sensitive bravado) and composer Karl Hyde (not afraid to write ugly when the moment calls for it). The meat of the production is a collection of verbatim interviews conducted with a number of men still living in the home towns that Simon, Scott and Karl have long since left behind. These interviews have been woven together by Stephens and dominant themes gently threaded through, until a collection of ‘small’ interviews build up into something ‘big’ and – dare we say it – universal.

The guilt and relief that Simon, Scott and Karl feel about leaving their home towns runs through Fatherland, a vein that pumps with acidic blood. That guilt is written into the script but it is also a strong part of the many songs and choreographed numbers that set this show alight. It is down to the music and movement – songs and dances that burn with love, loneliness, anger and regret – to express what the fathers and sons cannot.
This is a hugely personal venture and because of that it does occasionally feel indulgent. There’s a meta-theatrical element to Fatherland that raises a few laughs but feels a bit too clever-clever, and even a bit cowardly. Actors playing Karl, Simon and Scott frame the show: we watch them interview the men from “back home”, and we also see their reactions to the interviews and their thoughts about the process along the way. Throughout the show, Karl, Simon and Scott are badgered by a sceptical interviewee, Luke, who doubts the trio’s motives. “Isn’t this a bit indulgent?” asks Luke, and everyone in the theatre giggles. It feels like a guilt release valve – and a defensive measure against potential criticism – when perhaps the braver thing would’ve been to leave these doubts as an ugly, conflicting and exposing element of the show.
But despite a few scenes that stick in the throat, there’s way too much heart and heat in this piece to resist for too long. It’ll get to you. It got to me – and I’m hardly this production’s target demographic. There’s real pain and vulnerability and even romance at the heart of this piece – and, gradually, all that anger and bluster and obfuscation is translated into a simple desire to love.
I haven’t even mentioned Jon Bausor’s open plan metal-grate set, which riffs so brilliantly with Jon Clark’s peculiarly expressive lighting. Often the set looks pretty bare and soulless; a metal wasteland, and a nod to the heavy-industry that was once the back bone of so many of these fathers’ lives. But Clark’s lighting becomes an extra personality in this production, a playful off-stage presence that instantly injects the stage with heat, hope or anger – only to just as quickly take it all away again.
And then there is the huge chorus of men that floods the theatre in the closing stages. A wall of sound builds up around us and becomes a huge physical presence: heavy and threatening and impossible to escape. They are a crowd of football fans; tribal warriors; a band of fathers (or it sons?) fighting to be heard. On the stage, a roaming crowd of men wave huge white flags. They look like they’re angry and up for a fight – but on the point of surrender, too