'Finishing the Picture' review or 'Is that your best angle?' 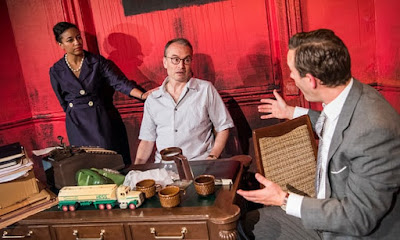 When Arthur Miller’s final play premiered in America in 2004, Marilyn Monroe had been dead for more than 40 years. The couple’s fraught marriage had ended in 1961, yet Miller could not get Monroe out of his system. Finishing the Picture feels like an exorcism, a celebration, an apology and an inquest – it’s a patchy but powerful look at the dark forces that made Monroe such a vital but troubled personality.
The play is not so loosely based on the real-life drama that surrounded the filming of Monroe’s final completed picture, The Misfits, written by Miller. Their relationship was breaking down and her depression resurfacing. Months later, Monroe was found dead. The names have been changed but this is absolutely Miller’s Marilyn story.
Finishing the Picture opens with filming five weeks overdue and the crew about to implode. The star of the show, Kitty, is refusing to get out of bed. Director Derek (Stephen Billington, preening) is about to lose his rag and his job, writer Paul (Jeremy Drakes) is sulking in the shadows, and a producer has been hastily flown in to save the picture.
Oliver Le Sueur has a quicksilver energy about him as producer Philip, who tries to cajole the crew into action. But Phil Willmott’s production feels a little stilted. Miller has elected to keep Kitty entirely off-stage. It’s a clever device, which emphasises Kitty’s loneliness, but it sucks the life out of the play. Everything is reported, precious little happens and the most interesting character doesn’t get a look in.
Things turn more compelling as the crew gather around Kitty’s bed and beg her to work. Isabella Van Braeckel’s red-room set darkens; a Rothko on the wall begins to look less like a window and more like prison bars. The director “consoles” Kitty: “Did I ever try to fuck you? Well then.” A cinematographer shines a light in Kitty’s eyes as if she were cattle, and the producer stoops over her bed and calls her “kid”. To these movie men, Kitty is a child, an animal, a piece of meat. The one thing Kitty is never allowed to be, hidden in the dark, is herself.