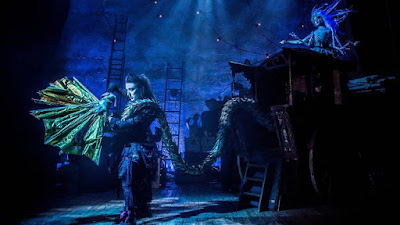 So. Much. Fun. Bring your kids – if they’re brave. Bring your mates – if you really like ‘em. Bring puppet lovers, story fans and goths. Basically, bring everyone. Les Enfants Terribles are back with their signature show and it’s a stunner: extravagantly imaginative and brimming with barmy puppets and rowdy live music.
It was first performed in 2007 and marked the moment that Les Enfants Terribles grew up and became big-time theatre players (they’ve just wound up a second blockbuster season of their immersive show ‘Alice’s Adventures Underground). ’The Terrible Infants’ is written by the company’s AD Oliver Lansley and is shot through with a demented energy yet still feels slick. Neil Townsend’s vivid music (all shocks and tingles) is performed with relish, Lansley’s script races through a medley of gruesome tales at quite a clip and the puppets (what puppets!) never stop moving, growing, growling and spurting giant tails or fishy heads.
Here is a company utterly sure of themselves and their own inimitable style (let’s call it Gothic Camp). The script is deliciously over the top and packed with absolutely audacious alliteration. The aesthetic is dark and eccentric but never frightening: Samuel Wyer’s set looks like an abandoned circus, as viewed at from beneath the bed covers. The performance style is ‘madcap vaudeville’ and every cast member – particularly Lansley and Serena Manteghi – nails it.
Some of the set-piece stories will knock your socks off. Beehive Beatrice is an absolute buzz, not to mention Tim and his tum and his mum. As for Finbar the fish – his glistening underwater adventure is theatrical gold.