'Laika' review or 'This is a mission for mutt-nik.' 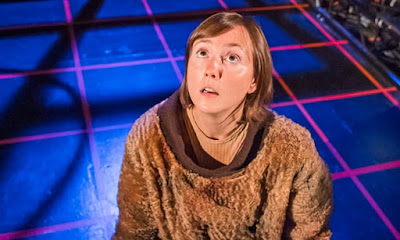 omething is scratching at the door that opens on to the stage and my 10-year-old theatre companion, Qeiva, is scared. Suddenly an actor in a brown fluffy jumper bursts on to stage. She scampers among us, panting wildly. Qeiva forgets her fear and falls for the pooch in 10 seconds flat. This isn’t any old dog though: this is Laika the space dog.
Laika’s tale is quite something, and it’s based on a true story. In 1957, a stray mutt was plucked off the streets of Moscow and selected for a space mission. Laika was the first living creature to orbit the Earth, and eventually became a bit of a celebrity. But this was always designed to be a one-way flight and poor old Laika died.
It’s a wild tale and a potentially devastating one. The only shame is that co-directors and writers Bryony Hannah (of Call the Midwife fame) and Avye Leventis didn’t just stick with the dog. Instead, in this show for six to 12-year-olds, Laika’s story has been interwoven with a schmaltzy narrative about young Sami (Nima Taleghani) and his astronaut mum (Anna Martine Freeman), set to go on a doomed mission to Mars. It feels unnecessary – as if it’s there to generate some tears when, really, Laika alone could have had us weeping in the aisles.
Josie Daxter charms and captivates as Laika. She has a single-minded way of behaving that is, well, dogged. When Laika is happy she glows; when she is sad she droops, and all the children in the theatre droop with her. But while the dog draws in the young audience, the family alienates them. Taleghani pushes his performance too hard and Sami ends up sounding like a bizarre cross between a very young kid and a south London geezer. While Qeiva eagerly follows the movement of Sami’s space mum, she is not moved by her story.
The main story is frequently crowded out by charming but distracting details. The chase between a Unicorn theatre usher and Laika is enjoyably wacky but it takes the story way off track. The same goes for a scene in which a range of toys are suspended above Verity Quinn’s lo-fi set (a boy’s bedroom with just a hint of outer space). At one point, ET floats above the stage. It looks lovely but it’s pretty confusing – especially since Qeiva and most children her age haven’t heard of ET.
As the story comes to a close, a range of neon constellations are paraded about the stage. “I don’t understand,” protests Qeiva. Eventually the constellations come together to create a gorgeous glowing dog – but the big picture has just taken too long to materialise.