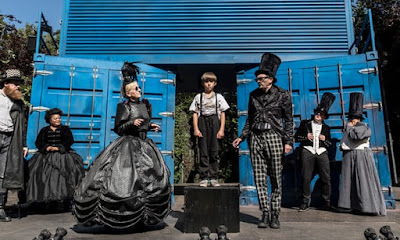 We are at a workhouse in 19th-century England. A giant, metal cargo crate sits on a stage, surrounded by shallow graves and tiny, white crosses. Grubby workers, dressed in 50 shades of black, are dancing in a mechanical daze. From the centre of this melancholy dance emerges a little boy, Oliver. He cups his hands and turns hopefully towards the audience: “Please, sir, can I have some more?”
Anya Reiss’s adaptation of the harrowing Dickens novel Oliver Twist starts strongly. Lucy Burge’s strange, juddery choreography suggests a world in which no one has control of their actions. Fly Davis’s set is stubbornly bleak and her monochrome costumes are intimidating yet inventive: umbrellas spring out from walking sticks and rich men glide about in towering velvet hats.
The Artful Dodger (a surprisingly sympathetic Danny-Boy Hatchard) and his gang of pickpockets wear spray-painted jackets and cheeky grins. They whizz about on the stage in rollerskate trainers, on hoverboards and scooters, and prompt yelps of admiration from my 10-year-old theatre companion, Qeiva. Dodger and his gang are the only people in Oliver’s world who have spirit and sparkle.
Director Caroline Byrne is not afraid of frightening her young audience. Michael Hodgson’s Fagin looks like a pawnbroker down on his luck, dressed in a shiny jacket and scruffy suit. He slides down ladders, catches shiny jewellery in his pockets and genuinely frightens with his eerie catch phrase: “My dear.” Daniel Hoffman-Gill is thunderingly imposing as workhouse boss Bumble and chief baddy Bill Sikes. When Bumble prowls about the audience searching for Oliver (a sweet, meek Tia-Lana Chinapyel), Qeiva hides behind me.
It is playful, fierce and pleasingly unpatronising, but things begin to unravel, particularly in the second act. Dickens wrote this exceedingly long and detailed novel in instalments; any stage version needs judicious editing and a clear, bold structure. Reiss’s ambitious adaptation spirals out of control and the endless plotlines begin to choke the life out of Byrne’s production.
Subplot follows subplot and Qeiva’s attention wanders. Byrne overcomplicates an already complicated plot. Nancy’s murder is portrayed euphemistically: a garage door shuts ominously behind her. It is far too subtle and I have to tell Qeiva that Nancy is dead. Another death is depicted by one actor shedding his clothes and chucking them off the side of the stage. It is meant to signify death by hanging but, to Qeiva, it looks more like an odd fashion show. Oliver’s story is lost in the confusion. Please, sir, can we have less next time?