'Disco Pigs' review or 'Did you say this pig was wild?' 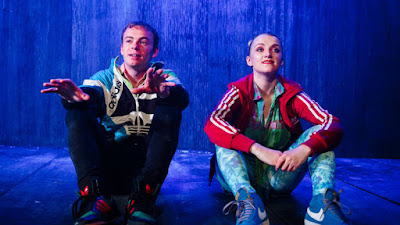 In 1997, ‘Disco Pigs’ – a swirling storm of a play about two angry and lonely teenagers in Cork – cemented playwright Enda Walsh’s status as a Very Big Deal. Here was a poet-playwright with hints of Beckett’s searching lyricism but a wild energy of his own. Director John Haidar has staged a surprisingly compassionate twentieth anniversary revival, but it’s a little bit too clean and controlled.

'Disco Pigs' is a two hander, and a hugely demanding one at that. The acting needs to be precise – or the flurry of words written in local dialect and idiosyncratic syntax will be lost. But there also needs to be a crazy mania burning beneath those speeches, as teenagers Runt (Evanna Lynch) and Pig (Colin Campbell) whirl around Cork looking for drink, discos, more drink – meaning – music, sex and shitloads of trouble.

Campbell has the air of a five year old trapped in a young man’s body: there’s an aching innocence about him that burns stronger the uglier things get. Lynch, who played the ethereal Luna Lovegood in Harry Potter, has a skittish charm but her diction isn’t up to the task. Neither Campbell nor Lynch feel wired or dangerous enough and the violent explosions, which burst through this play, lack a little heat.

John Haidar carves out some nice moments with the canny use of lights, movement and music against Richard Kent’s charcoal black set – although he might’ve trusted in the language a little more and just let go. It’s the fleeting moments of hope that really sting, as Pig loses himself in the ‘deep deep deep’ music and Runt stares out at the oceans and yearns for the tide to ‘take me out of me’.