'Twitstorm' review or 'Can we squeeze in a few more characters?' 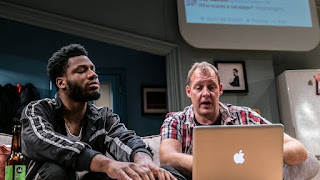 A Twitstorm has hit Manton Towers. TV host Guy Manton has called his African guest a ‘chigger’ – a cross between a charity mugger and a nigger – and his offensive joke has wound up on Twitter. The trolls are furiously tweeting, the press is circling, and Guy’s career is in tatters. Will this National Treasure weather the storm and live to offend another day?
Career death by Twitter has become fairly commonplace (fingers crossed a certain President is its next victim), so it’s not a bad idea to write a play about it. But ‘Twitstorm’ is a terrible muddle. It’s written by Chris England, who penned the funny but thin comedy ‘Breakfast with Johnny Willkinson’. England is great at writing sweary outbursts but almost everything else in here – tone, structure, dialogue and character – is seriously patchy.
Anthony Lamble’s pristine set invokes a shiny middle class home, complete with pretty cushions and a fancy fridge. Tweets are occasionally projected on screens overhead. It all looks very nice indeed but the fact is that you could shut your eyes throughout Jonathan Lewis’s straight-laced production and you’d miss very little. This is a radio play that has wound up on stage.
Jason Merrells is fairly convincing as a sneering TV host, whose ego is as big as his belly – although it’s a shame his stomach stuffing kept slipping. We know Claire Goose can act her socks off (see TV’s ‘The Coroner’) but she has little to do as strained wife Bex. Justin Edwards hardly stretches himself as geeky friend Neil (and looks very uncomfortable in various frozen ‘comedy’ poses) and it’s actually playwright Chris England who has the most fun as the spluttering producer Rupert. Tom Moutchi has real presence but barely comes to life as mysterious African house-guest Ike who, in an ironic twist, is merely a plot-device in this play about the pitfalls of casual stereotyping.