'Double Double Act' review or 'Care to place a bet on that?' 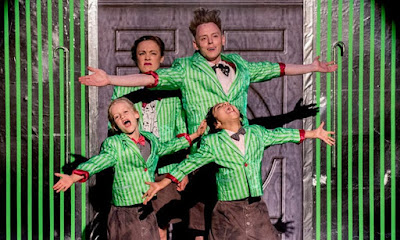 Imagine the children’s TV classic Fun House – only the games have been replaced with bizarre sketches, kooky dance numbers and whip-smart wordplay. Throw in two adult hosts, dressed in neon pinstripe suits and with eerie smiles as wide as the stage. Add two mini-hosts who are dressed identically, their flashy suits threatening to engulf them. Finish off with lashings of green slime, and the result is Made in China’s seriously wacky Double Double Act. Wild, ambitious, juvenile and pretentious, it’s frankly one hell of a mess. But it is a show that pushes at the boundaries of children’s theatre and isn’t afraid to show a young audience just how strange and unsettling the stage can be.
Before the show, I try to prepare Qeiva, my 10-year-old companion, for what lies ahead. Made in China are not your usual children’s theatre practitioners; I’ve seen Jessica Latowicki dance with apocalyptic rage and stuff her face with more marshmallows than you’ve ever dreamed of. I’ve seen Christopher Brett Bailey deliver a spoken word performance of such obliterating intensity that I wanted to curl up into a ball and cry. I bet Qeiva that this will be the oddest show she has ever seen.
Qeiva accepts, but after five minutes she has lost her bet. She looks absolutely baffled. We’ve seen two seven-year-olds – Caspian Tarafdar and Caitlin Finlay – banter bolshily with the audience. Tarafdar is particularly mesmerising and pours heart and soul into every word he utters. He looks totally at home on Emma Bailey’s slapdash set, washed in bright colours and saturated with sparkle. “They’re so young,” whispers Qeiva, shocked at the sight of seven-year-olds owning the stage.
By the end of the show, the adult stars have blasted the audience with surreal patter, made evil magic potions, performed mad little dance skits (“It doesn’t even go with the music,” says Qeiva) and invaded the audience with alarming and thrilling regularity. There’s no narrative whatsoever, nothing makes much sense (“I don’t get it!”) and no one is safe (“I’m scared!”) as the performers roam through the audience.
There are moments when the show – created by Made in China’s Tim Cowbury – pushes too hard. The wordplay gets far too obscure, the atmosphere is erratic to the point of queasiness and the scenes grow so surreal that even the performers begin to look a little lost.
I’ve never seen Qeiva so confused and so thrilled at the theatre. As we leave, I ask her to sum up the show in one word. She ponders the question, her eyes dancing: “Weird!”