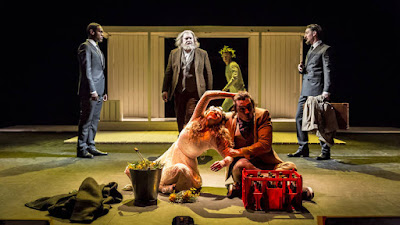 Mysterious oracles, magical statues and a talking incantation of Time. Frankly, ‘The Winter’s Tale’ is a little bit crackers. Director Declan Donnellan has gone all in with a bracing and sometimes shocking production, which isn’t afraid to occasionally stumble. Bursting with brave performances and distinctive directorial choices, this is a Shakespearian joyride from those bruising interpreters of the Bard, Cheek by Jowl.
Donnellan’s first bold stroke is to cast Orlando James as Leontes, the violently jealous king who brings his kingdom crashing to its knees. The part is normally played by a grand statesman of the theatre: Ian McKellen, Simon Russell Beale, Greg Hicks. This choice lends productions a certain gravitas – but, in casting such a fiery young actor, Donnellan has made this ‘Winter’s Tale’ wilder still.
With his blonde locks and boundless energy (his eyes are so wide he looks coked up), James’s Leontes is always in motion and never in control. He is a child king who, like his son, has wild fits when things do not go his way. His behaviour stuns. In a jealous rage, Leontes kicks his pregnant wife Hermione (an impossibly restrained Natalie Radmall-Quirke) in the stomach. And when the trial turns against Leontes, he bursts into hysterical laughter that rattles on and on.
Donnellan purposefully ruptures his production: the second half is a comical party-popper. Nick Ormerod’s pared-down set (white props and moody lighting) transforms into an explosion of colour, fairy lights and sparkle. The actors ad-lib wildly, Ryan Donaldson’s Autolycus strums away on his guitar and heckles the audience and a Jeremy Kyle-style talk show is forcefully wedged into the action. It doesn’t always work but it’s playful and mad and brilliantly un-boring – and there is always mystery and sorrow lurking at the edges. When a statue is brought back to life in the play’s dying moments it is as if death walks among us and a haunting regret grabs us by the throat.