'My First Ballet: Cinderella' review or 'We shall go to the ball!' 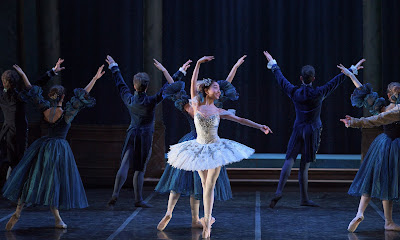 It’s seven o’clock. My god-daughter Blue (aged six) should be in bed – but she’s staying up to watch My First Ballet: Cinderella. Blue’s biggest concern before the show: what dress will Cinderella wear and will it be blue? By the time Cinders makes it to the ball, Blue’s real world has disappeared. She turns to me with eyes glinting: “She’s here!” There’s magic in these glass slippers.

The show stars English National Ballet School students and has been choreographed – astutely if not extravagantly – by ENB graduate George Williamson. David Walker’s set and costumes have been swiped from the ENB collection and the dresses, in particular, are gorgeously romantic. They lend a grownup gloss to a student production that, understandably, occasionally falters.
The chorus is strong but it’s the solo sequences that sparkle. The dance of the seasonal fairies is a brilliant showcase and allows the young dancers to stretch out and express themselves. Rentaro Nakaaki is luminous as Spring, his great arching leaps full of hope and vitality. It’s one of the few moments that Prokofiev’s music (blasted out through loudspeakers) and the movement properly feed off each other.
Elsewhere, the story and dance is incessantly interrupted by Sarah Goddard’s narration, scripted by Adam Peck. Every exit and entrance is announced, every plot twist vocalised, every emotion carefully spelled out. It actually gets a bit silly. When the sisters squabble and tear a pretty scarf, the narrator points out: “It’s broken!” And when Cinderella’s golden carriage is grandly pulled on stage, the narrator coos: “Look, the magic’s working!”
During the interval, Blue asks why the characters aren’t talking. I struggle to explain that the dancing should speak for itself. There are a few precious moments when the choreography speaks directly to the children. Remi Nakano is a graceful Cinderella and her fluid movements contrast brilliantly with the hard lines of Cinder’s stepmother (Molly Hall) and stepsisters. It’s obvious just from looking at Cinderella dance that she is different.
But it’s the humour that provokes the most spontaneous reactions. There’s a cracking scene at the ball, when the stepsisters fail miserably to dance with the Prince. Alejandra Plaza González is a natural comic and as she is dragged about the dancefloor – legs outstretched – the children squeal. As the clock strikes 12 and the chorus angrily chop their arms, anxiety infects the audience. The girl behind me starts to dance in her seat, the story now living inside her.