'The Iron Man' review or 'Are you ready to test your mettle?' 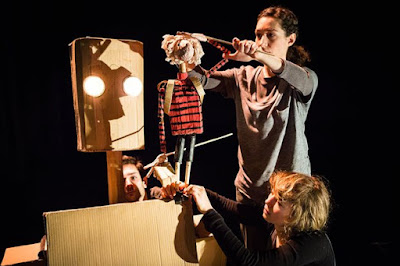 With shadow puppetry, singing, dancing, stop motion animation and live flames added to Ted Hughes’s oozing, dark narrative, this is an ambitious reworking of the children’s story The Iron Man. It’s like Matthew Robins and his team have effectively thrown theatre at The Iron Man and, while some of it sticks, a lot of it doesn’t. As Hannah, my 13-year-old theatre companion, remarks: “They’ve tried to think so far out of the box, that the box has disappeared.”
In Hughes’s story, the Iron Man – taller than the tallest tree – munches his way through all the metal in a small village. The farmers get so upset that they capture him and chuck him in a pit. A small boy befriends the Iron Man and, when a crazy bat creature threatens to destroy the planet, he is called upon to save the day. The story ends with the creature orbiting the globe, singing a peaceful melody. It’s a seriously strange adventure and requires clean lines and big emotions on stage – but Robins and his wildly talented team have taken the opposite approach. They’ve made matters much, much more complicated.
It’s hard to make out the story amid the restless stage activity. There’s a very long scene at the start when the Iron Man, having fallen off a cliff, tries to piece himself together. The three performers – Justyna Janiszewska, Avye Leventis and Daniel Naddafy – take an age reassembling Robins’s and Tim Hunkin’s giant cardboard box sculpture. Perhaps this scene was meant to translate into some sort of mournful dance but it ends up feeling messy and over-extended.
Lots of scenes are dazzlingly imaginative, but they don’t get us any closer to Hughes’ story. When we meet the boy for the first time, it’s via an ambitious but overly complicated piece of stagecraft. A scrappy wooden puppet is recorded in a tiny set on stage, and the image is then projected on to the back wall. I ask Hannah who she thinks the puppet is and she has no idea. Neither do I.
All the different styles of theatre begin to work against each other. Robins’ looming landscapes and wistful sketches are stunning, but his sweeping projections never merge with the activity on stage. Hughes’s narrative is rich and threatening, but it’s delivered entirely as a voiceover and feels one step removed from the puppets and performers. There’s even a silly song but, while it’s wittily performed, it’s also wildly out of place. I watch Hannah literally pull back from the show.
Things heat up in the closing scenes as the Iron Man challenges the “terribly black and terribly fanged” bat creature to a test of strength. An iron sculpture is laid on top of a naked flame and the children in the audience lean in. The bat creature (a puppet-performer hybrid, made out of a sweeping cloak and sculpted wolf-like head) sweeps about the stage in a manic dance, angry lights flashing and music clanging. Finally, the stage lights up with Hughes’s dark purpose, as giant shadows threaten to envelop us all.