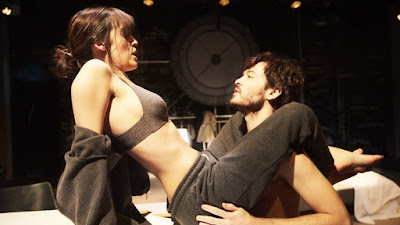 Arthur Schnitzler’s saucy play, La Ronde (1897), was so risqué that it was initially performed only to friends. His drama about fate, desire and love was banned by the censors but eventually premiered, sweaty and triumphant, in 1920. Max Gill’s new adaptation plays in the suitably shady underground venue The Bunker. The cast is sparky and energetic as hell but there’s something strangely asexual about what is essentially a play about sex.
The big twist in Max Gill’s adaptation is a giant wheel of fortune, which hovers brightly above the stage. In between scenes, the wheel is spun and the actors’ roles decided. As the wheel spins, the cast change costume in front of a huge graffiti wall, packed with words such as ‘intense’, ‘steamy’, ‘desire’.  Naked limbs fly about, Jack Weir’s lighting throbs and snatched confessions, taken from Gill’s interviews with real-life Londoners, boom overhead. It’s all pretty charged.
The real scenes, unfortunately, are less of a thrill. Writer and director Gill has maintained Schnitzler’s structure – lovers, themes and props criss-cross throughout – but most of the material is original. A lot of scenes feel a little predictable, the characters overdone. And while there’s a heck of a lot of sex – incest, adultery, internet-dating, sado-masochism – there’s very little steam. Gill is pushing at the idea of sex as performance but perhaps he pushes a little too hard. The scenes rarely feel real.
A few powerful moments of intimacy emerge. A hug between a doctor (Lauren Samuels, sharp throughout) and lecturer (Alex Vlahos) hits hard and, when a bus driver (Amanda Wilkin – forceful) begs a prostitute to kiss her, her loneliness echoes. The dirtiest word of all, suggests Gill, is love.