Mary Stuart review or 'Is this coin loaded?' 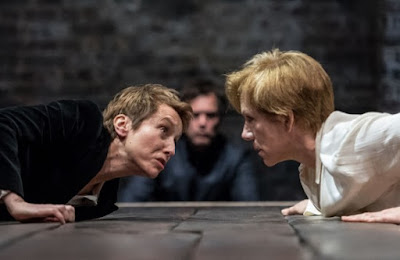 Here’s a selection of my notes, written whilst watching Robert Icke’s new adaptation of Friedrich Schiller’s heady (oh yes, I said it) play Mary Stuart: ‘Gosh, there’s a lot of history’; ‘It’s just one great procrastination!’ and my personal favourite: ‘Why won’t anyone stop talking?’
Listen, there’s no doubt this is an ‘impressive’ production of an ‘important’ play (written in 1800); words like ‘timely’, ‘incisive’ and ‘provocative’ spring to mind. I can’t and won’t deny that Schiller’s study of two Queens and cousins – Queen Elizabeth I and Mary Stuart – locked in a see-sawing game of power tells us a lot about the sheer amount of luck involved in politics, and the way that cowardice runs through history like a toxic river gathering speed and volume. Schiller was hugely indebted to Shakespeare and his script is brilliantly crafted and designed: each beat is measured with exquisite precision and the dialogue carved out with exacting purpose. But. But.
Robert Icke has made some interesting tweaks, too. His canny embellishments add dramatic frisson and contemporary catching points. The key innovation happens at the beginning of the production when the lead actors – Juliet Stevenson and Lia Williams – slowly sashay onto Hildegard’s Bechlter’s raised podium stage and watch a coin toss. Lia Williams is asked to make a call – heads (ha!) – and the roles are allocated accordingly (on press night Williams drew Mary Stuart and Juliet Stevenson, Elizabeth). And so history is set in motion with a mere toss of a coin and the fickleness of history, the exquisite delicacy of legacy, flares up around the framework of every scene that follows. But. But.

It’s all a bit ‘showy’, this toss of the coin and I’m not convinced it’s necessary – at least not quite to this extent. Stevenson and Williams had to learn two monumental roles and the press night was consequently – and understandably – postponed. The actors were clearly struggling with such a task. One could still sense the strain of that task on opening night: the occasional stuttered line, the slightly awkward shimmer that encased both performances. On one level, the fragility of both performances spoke of the thin line that separated Elizabeth and Mary Stuart’s destinies; the tiny turns of fate that determined Elizabeth’s successful rein and Mary’s death. One can appreciate those implications on an intellectual level. But. But.
I mourned the greater performances I might’ve seen, the more nuanced and convincing characters I might have known. Director and adaptor Icke has created a defiantly sparse production. Until a rather beautiful closing scene – during which Elizabeth is dressed up in period costume and Mary Stuart is stripped and prepared for her beheading – both Mary and Elizabeth, along with their attendants, are dressed in contemporary clothes. Mary and Elizabeth wear identical costumes: black trousers and a white shirt. So, whilst the play is still of the 1560s, the costumes nod to the modern day. Again, it’s not difficult to understand the canny implications of this shift – and the way these contemporary connotations might help us to reflect on our own precarious structures of power. But. But.
There’s so little sense of ceremony about this production and so few visual indicators of power. Crucially, I found it very hard to believe that Elizabeth was a Queen, or Mary a now-exiled and imprisoned Scottish Queen. I also craved a little visual relief. Bechtler’s stage is persistently gloomy and bare. Occasionally, the stage rotates – and the wheel of fortune turns – but that’s about it for visual pizazz. Laura Marling’s oozing music runs like oil beneath the scenes and adds some much-needed texture to the production. Screens are suspended around the stage but they‘re used very little, other than to mark out the scene changes. It is all very dark and very pared back. Alongside all of this there is endless – carefully measured – talking, as Elizabeth agonises over what to do with an imprisoned Mary. At its heart, this play is essentially a waiting game – a holding off of the inevitable that we all know too well – and that waiting game does get a little bloody trying.
There’s a snag about the principal characters too. Put simply, neither Queen is particularly impressive. That is no reflection on the performances. Stevenson’s Elizabeth radiates with an ice hot dignity that only Stevenson can create, and Williams’ Mary has a sort of earthy strength that blazes from every pore. But Elizabeth and Mary are easily manipulated and hopelessly in thrall to their hearts, and both are undone by their love for the slimy and second-rate Leicester (John Light – suitably slimy and second-rate). As the critical point draws closer and a decision about Mary must be made, Elizabeth drops to the floor in agony. She cries out, ‘I am weak’ and writhes about at the feet of a male attendant. Of course, one might say that such a scene exposes the fragile humanity that lingers beneath such powerful figures in history. And – yet – I struggle to imagine a play about two male leaders playing out in such a way. On a basic level, it is galling that a play about two extraordinarily powerful women is principally a play about weakness and delay.
And so the toss of a coin, and Schiller’s dramatic choices, gradually chip away at the Queens’ power and performers’ impact. It is only when the words dry up in the penultimate scene that Stevenson and Williams begin to exert real influence. Williams stands still as she is stripped down and readied for her execution, and there is a lightness and calm about her that feels incredibly brave and strong. Stevenson stands frozen to the spot, as her face is covered in white powder and her body enshrouded in heavy costume. By the end of this ceremony, Stevenson’s Queen Elizabeth cannot move. Only her eyes – a tiny dot amid that suffocating white – remain exposed. They dart about and sparkle, instinctively searching for an escape from the gilded cage of power.