'All The Angels' review or 'Gorgeous harmonies but does that scene feel a little flat?' 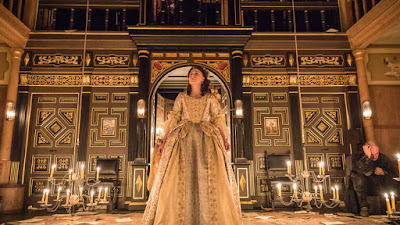 Picture this. A beautiful theatre bathed in the golden light of endless flickering candles. A stunning singer dressed in a sparkling dress. The yearning strains of Handel’s ‘Messiah’ are rising up around you. There are some moments in ‘All the Angels’ that are so beautiful, they’re almost spiritual. Nick Drake’s ‘making of’ drama about tHandel’s masterpiece, which returns to the Sam Wanamaker Playhouse following a successful run last year, isn’t particularly elegant or insightful. It isn’t even that dramatic. But there is beauty in this show and some transporting scenes, when the music glows anew and all the brighter.
We begin in Chester in 1742. Poor winds meant that Handel could not travel and had to hold his first rehearsals above a pub. Yes, a pub! The action then moves to Dublin, where Handel had just a few weeks to teach Susannah Cibber – a disgraced actress and budding alto – how to sing. This is no musical ditty, after all. This is the bloomin’ ‘Messiah’.
Preparations play out on Mike Britton’s glowing stage, carpeted and decked with manuscripts. The action is narrated by body snatcher Crazy Crow (a twinkling Sean Campion) who, on hearing Handel’s music, begins to have a spiritual crisis. It’s all a bit too tidy, though Jonathan Munby directs with real grace and the scenes in which the music comes to life – and the singers haunt the stage as a band plays on the balcony above – are excellent. But some of the more plot-driven scenes are so stiff you could snap them clean in two.
The singing lessons between a delightfully grumpy Handel (David Horovitch) and the sensitive Susannah (Kelly Price) feel a tad predictable. Yet just as the shackles are rising, Price begins to sing. Her voice is rich and deep and, under her command, Handel’s music feels sad and mournful – but hopeful too. There is an innocence about the music – a belief in something better – that flows right through us and makes us glow.