'The Sewing Group' review or 'Who is in charge of the thread?' 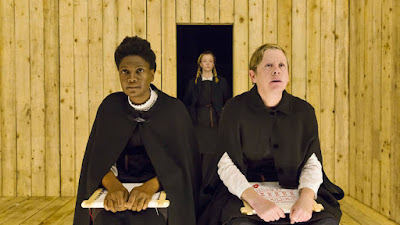 Writer EV Crowe sure does like to play with her audience – almost as if she’s wielding the question mark as a weapon. ‘The Sewing Group’ is full of uncertainty. It’s set in a rural village in the 1700s. It is about women, narrative, the very idea of usefulness. Or is it? This is a teasing tapestry of a play, which Crowe keeps picking away at, until we’re left with a startling new image – and a fair few loose ends.
Stuart Laing designs and directs and his set is minimalist with a hint of spookiness and silliness too. The stage looks a little like a giant sauna. Everything is wooden: the walls, stools, floor and ceiling. This is where the women – dressed in great black cloaks – work. A single door opens out onto a pitch black beyond; the end of narrative, the beginning of backstage, a great big shrug of the shoulders.
The dialogue and performances slip constantly. A mysterious new woman (Fiona Glascott) – named in the script as C – joins the village. She wants something more for these women – new patterns, purpose and stories. But the women are a little strange. Their speech is rinsed of emotion and peppered with anachronisms. As the framework begins to slide, they start to control the music, lights, costumes.
The actors do really well to do hold on to the ambiguity but also extract a few giggles and even empathy. Fiona Glascott’s central performance hums with skittish energy, Jane Hazlegrove’s easy humour lightens the atmosphere and Alison O’Donnell – who recently starred in Crowe’s play ‘Brenda’ – is arch, comic and confident.
But the laughs feel a little strained – as if the audience is madly trying to ‘get’ the joke. When the big reveal happens, it’s a tad underwhelming. Crowe is a master of form – but sometimes it crowds out her writing, trapping her play rather than setting it free.