'Orca' review or 'Are you sure you can see to the bottom?' 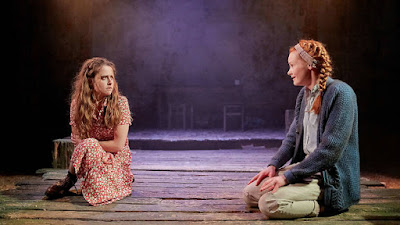 'Orca' unfolds at the end of a pier in a remote island community. The pier is covered in patchy moss and has been worn down by the crashing sea and searching winds. Matt Grinter’s fine new play gently – and finally devastatingly – explores the way in which a small community moulds and reshapes its inhabitants, with sometimes brutal force.
It revolves around a local legend, which states that only the ‘daughter’ can protect the fish from the orcas (killer whales) that swarm the seas in midsummer. Every year, the local young girls eagerly – and prettily – dance for the role of the daughter. This year it is young Fan’s turn to dance, but her sister Maggie is desperate for Fan not to take part. The more Maggie protests – and the more she hints at the horror she herself has experienced - the more isolated she becomes.
Director Alice Hamilton’s production hovers hauntingly at the edges of reality. There’s something a little too picturesque about Frankie Bradshaw’s set; as if a coastal painting had been willed into existence. Yet the sand and pebbles that line the stage and spill into the audience are all too real. The pier occasionally throbs and glows and the music screeches – but Richard Hammarton’s authentic sound effects (wind whistles past our ears) keeps us rooted in reality.
There’s a beautiful balance about this piece, which seduces us with myth and theatrical magic – but carefully and continually brings us back to our senses. The performances are equally compelling and complex. Cara Langley’s Fan radiates with a type of innocence so strong you might touch it. Roba Morison’s body is taut with resolve and one realises – with dread – what awful conviction it takes to speak out. Aden Gillet plays the Father of the village and, whilst his speech is smooth, his eyes flicker, dart and darken, utterly at odds with the supposed support he offers.