'The Secret Garden' review or 'Are you sure you can smell the roses?' 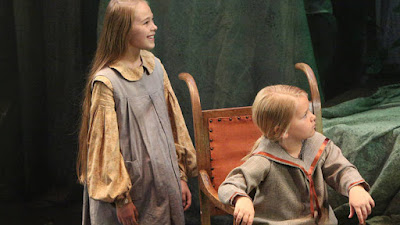 P2P productions used a huge rotating cast of children for their production of Annie Junior last year – and they’re up to same tricks with The Secret Garden. The stage is positively bursting with kids – and the occasional rose-bud – in this pruned version of Marsha Norman’s Tony award-winning musical adaptation. But a sea of kids doesn’t necessarily make for a relatable or exciting piece of children’s theatre – and for all the charm of the young actors, this garden is a little wilted.
Norman’s book stays faithful to Frances Hodgson-Burnett’s original novel – and sees 11 year old Mary Lennox whisked off to her uncle’s house in Yorkshire, following her parents’ death. Here, Mary encounters jolly country folk (Samantha Bingley sparkles as maid Martha), a bed-bound cousin – and a dead aunt who will not stop singing about her beautiful garden.
The fun of this story has always come from Mary and her moody ways – and Alana Hinge pouts and stomps her way through the show with a bright energy. She’s great fun to watch – as is Sam Procter as stroppy cousin Colin. The older characters are less appealing – and whilst the actors have strong singing voices, they’re guilty of rattling through the script.
The young cast swirl about the stage with gusto - but I’m not entirely sure what they’re doing there. Jamie Neal’s choreography grows repetitive as the children dash – mindlessly - back and forth, and Lizzy Leech’s sheet-strewn set is a bit bland. As Mary’s new friend Dickon might say: there’s plenty of wilt (promise) in director Jamie Neal’s show – but it never bursts into bloom.