'Marco Polo: An Untold Love Story' review or 'I think we've veered a little off track...' 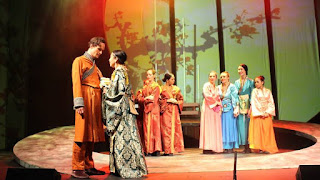 Venetian merchant Marco Polo rewrote the map with his travels to Asia in the thirteenth century. Cartographers literally shifted boundaries because of him. He also penned the ‘Book of the Marvels of the World’, which is why his name sounds familiar. Rogelio Saldo Chua’s new musical is based on Polo’s travels, although the love story bit is pure conjecture. Unfortunately, no boundaries have been pushed in the making of this muddled and plodding show.
The first half feels very slow – despite the fact that Marco Polo (Lawrence Olsworth-Peter) spends the entire time travelling eastwards (walking endlessly around Mio Infante’s spiralling platform). Olsworth-Peter has a strong, clean voice but the peppy songs about hope and journeys begin to merge. Meanwhile, in Cathay, Princess Kogajin (Stephanie Reese) is determined to marry for love. Marco Polo and the Princess fall head over heels – but their union isn’t meant to be.
There’s a slight snag with this love story: there isn’t any love. The pivotal moment arrives when Princess Kogajin takes off her helmet and swishes her hair about. That’s it. There’s also an excruciating seduction scene, in which Marco Polo strips down to what can only be described as a nappy but – otherwise – there’s very little love to go on.
The second half focuses on Marco Polo’s quest to become a baron – and hence worthy of the Princess’ love. That sounds quite fun – but the script gets bogged down in dry details and fussy diction. Director Preece Killick constantly refreshes the sepia projections on the back wall and even brings on some ballerinas – but it feels laboured. It doesn’t help that the seven-piece orchestra is sat in the wings. There’s no feeling of spontaneity and the story of this great traveller grinds to a halt.