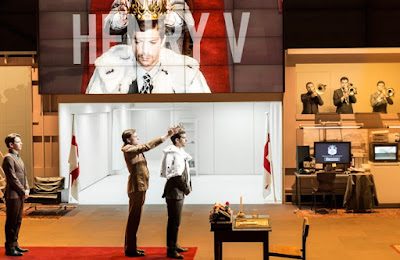 There is so much fizzing and crackling away in Ivo van Hove’s ‘Kings of War’ that I seriously recommend having a drink or two beforehand. Also – the whole piece is in Dutch with English surtitles. That means you’ll effectively be reading, and absorbing, for four and half hours on the trot. Trust me, you don’t want to overthink this one or you’ll end up exhausted. I know I did. Let Ivo van Hove do the thinking for you. He knows what he’s doing.

And try not to worry about the plot. ‘Kings of War’ covers five of Shakespeare’s history plays - Henry V, Henry VI (parts I, II and II) and Richard III – but the finer details are not important. In fact, a lot of the finer details have been cheerfully obliterated in this bulldozing – but acutely attuned - adaptation. It doesn’t matter if you get a little lost. You don’t even need to know about the Wars of the Roses. All you need to know is that this is a play about men and power, god and fear.

In fact, ‘Kings of War’ is barely even about Kings. All the normal trappings of Kingship have been ripped away: the Kings wear modern-day suits and there are no frills of cloaks for them to hide behind. They sit on chairs, not thrones. They spend their time in mediocre offices or demure domestic spaces. The only ceremony that accompanies this line of Kings is a small brass band that sits (and sometimes) stands in a boxed-off section just above the stage. These musicians do not – as you might expect – embolden the Kings on show. In fact, they often seem to taunt our line of monarchs; to haunt them with a majestic or mythic quality they cannot hope to match.

Ramsey Nasr’s Henry V does not (as Jude Law did) ripple with muscles or – as was the case in Propeller’s testosterone-tastic interpretation – cry out with brutish authority to his men. He barely even fights. Instead, Nasr’s King Henry V spends a lot of time in his own, in his office. His aides sit at desks on opposite sides of the stage, far away from their leader and his influence (Jan Versweyveld’s sparse design yawns with empty spaces - all the better for these leaders to lose themselves in). One of Henry’s greatest victories is summarised using a few measly graphics and a stream of text; it’s hard to grasp its vast scale or human cost. When Henry rouses his ‘band of brothers’, he stands alone; and when he dresses up in disguise and talks with his fellow soldiers on the eve of battle, he meets them off stage and in the wings. We do not see him fight. We do not see him inspire. We do not see him win. Great gulfs open out between the King and his subjects, the battle and the bloodshed, the King’s decisions and the impact of his choices. At pivotal moments – such as when Henry admits on the night before battle that ‘in his nakedness he is but a man’ – all these tensions are reduced to the conflict between Henry the man and Henry the King.

Whilst Henry struggles to unite his private and public self, his son - Henry VI - barely has one personality, let alone two. Eelco Smits’ Henry VI is a snivelling slip of a man; a chap with huge glasses and a runny nose, who seems happiest when snuggled up in bed. Unlike his isolated father, Henry VI is constantly surrounded by his aides; here is a man who can find himself only in the reflection of others. Whilst Henry V was conceived in battle, Henry VI was – surely – conceived in fear. All his father’s doubts and fears are bundled up inside him. When Henry VI sits at a great long table, he sees only who sat there before him – and when he looks to the gods, it is in order to escape himself rather than find an inner strength.

Religion snakes its way through Ivo van Have’s production, first bringing fear but eventually inspiring hatred. Henry V looks to religion on the eve of battle or - interestingly – when appalled by the extent of his victory (When Henry V learns that his army has defeated the French, and killed thousands with it, he sighs – ‘God, your arm was here.’). Henry VI, however, spends his entire reign with half an eye cast up towards heaven. When Henry VI learns that he has effectively lost France, he demurs softly: ‘God’s will is done.’ And when he is cajoled into arresting Gloucester (effectively his guardian), Henry VI scrabbles about on the floor, cries and prays. When his aides try to pick him above, Henry adopts - just for a second – the pose of Jesus crucified on the cross. Here is the King as the ultimate victim; a King who does not find in god a symbol of strength but, instead, a searing emblem of sacrifice.

Henry VI’s fear, and the protection he seeks in his religion, glows boldly throughout. As Richard III shuffles in from the wings – and begins to make his play for power – Henry VI retreats further and further into the shadows and the ‘protective’ embrace of god. In one scene, which plays out off-stage but is projected overhead, Henry VI hides behind a Bible. Richard (played with a brooding, natural brutality by Hans Kesting) grabs the Bible from in front of Henry V’s face, tears out the pages and stuffs them in Henry’s mouth. This is where history is taking us then: from the fear and isolation (but residual humanity of Henry V), to the snivelling cowardice (but strangled faith) of Henry VI, to the ‘unnatural’ and ‘black servant of the devil’ that is Richard III.

There is a descent tracked in this production – a loss of faith, a stripping away of humanity and a tumbling towards the present day – that is properly terrifying. By the time Richard is gearing up for his battle for power (and this is a King who fights purely for himself rather than his country), the stage – with its flickering black movies and old-fashioned war maps – has been cleared and lent a stark, contemporary glean. Richard’s world has become unmistakably our own. He sits at a desk with the three telephones that have accompanied every King before him - but when Richard picks up the phone, it is Obama and Putin with whom he speaks. It is as if Richard’s iron will – his burning and corrosive ambition – has somehow ripped through the tapestry of history and reached across the ages and out towards us. He is the only King who might leap off the stage and walk among the stalls.

Here is a King who requires no God. No aides. No fancy projections. No history. No lineage. No precedent.

Here is a King who requires no one but himself. Kesting’s Richard spends an awful lot of time dragging himself across the stage (his body is bent but not deformed) and staring at his reflection in the mirror. Kesting’s Richard has a streaky birthmark on his face; it is as if all the blood from all those battles has congealed and curdled inside him. Here stands Richard: the memory and remnant of all the horror that went before him, only rinsed of any doubt or love or humility.

Richard’s speech has been carved up with such skill that it bursts with narcissistic intent: ‘me, me, me, me, me, me, me’. He stands in front of the mirror, strokes his stained face and proclaims: ‘I am myself alone’. He scampers about the stage with a carpet for a cloak and seems to run right through us. He stands alone before battle and looks – not to god or even inside himself – but only at his reflection; ‘Richard embraces Richard’. And what a chilling and empty embrace it is. 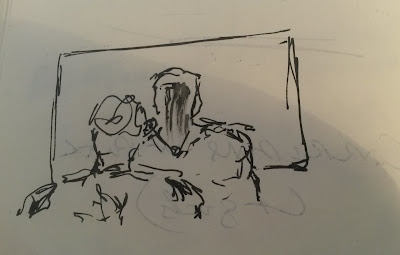