'Boy' review or 'Can we change the direction of this thing?' 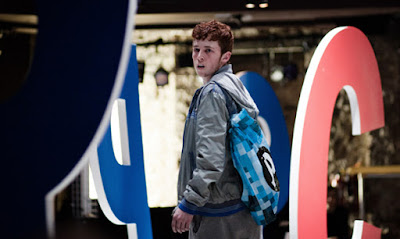 Here is what I love – and greatly admire - about The Almeida, Rupert Goold and his fiendishly talented crew: they are not afraid to fail. They might as well have ‘GO BIG OR GO HOME’ emblazoned above their theatre. I suspect there might be some glorious fuck ups here at some point in the future, but that’s all part of the thrill. Everyone who works at The Almeida is willing to take big risks in order to create distinctive, crackling, urgent theatre – and Leo Butler’s ‘Boy’ is no exception.

Director Sacha Wares’ audacious production comes amazingly – excitingly – close to de-railing (literally) throughout this short but packed theatrical event (let’s call it an event, shall we?). The seating has, once again, been reconfigured to allow Miriam Buether’s spectacular set to shine. A travellator winds through the stalls, alongside and above the audience, and is flooded with London life. Props are attached to a continuously roaming stage; a series of doors, a bus-stop, a line of supermarket tills, a tree, a building site and the whole of Sports Direct all make brief appearances. School girls, drug dealers, doctors, tramps, commuters – the background view to our everyday lives – snake around the audience and melt into the wings. Amidst all of this activity walks working class lad Liam, a young teenager who has just finished his GCSEs and now finds himself bang out of options, ideas, support, friends, family – direction.

There’s a hell of a lot going on here and, initially, the production feels way too busy. There’s simply no way that young Liam – played with spiky frailty by Frankie Fox – can hope to contend with this wave of glitzy stage business. On top of all this shiny activity, there’s also an incredible stage trick at play throughout this production. All the actors seem to sit on thin air – a lot like those street performers you might see in Covent Garden. The cast winds past us, again and again, sitting, lying and leaning on absolutely bleeding nothing. It’s extraordinary and baffling and you’ll spend an awful lot of time trying to figure it out (I still am). A trick like this, alongside all that glittering stage business, sets off alarm bells: it’s too distracting; it’s pointless posturing; it draws the focus away from Liam and places it firmly on the director and designer, waiting smugly behind the scenes. It takes a little while to realise that all these distractions are exactly the point.

‘Boy’ is all about Liam – yet this is a production which has the balls (and foresight) to almost lose sight of Liam completely. Frankie Fox is on his stage debut and he is anything but a towering presence. He’s tentative. He mutters. It’s pretty hard to make out what he’s saying. Fox’s skin is so pale and so soft that it looks like it might crack with the tiniest gust of wind. He looks utterly lost – and heartbreakingly young – before the show even begins. And to top it all off, Liam is barely even given a story: we watch him visit the GP, roam the streets, kick about at a bus-stop, chow down on some discarded fried chicken and buy chocolate milk at Sainsbury’s. It’s as if the writer, director and designer couldn’t give two shits about Liam; the main guy, the star of this show.

As if that wasn’t enough, Liam is hardly even given a script. I’m not sure he strings an entire sentence together throughout the play. Instead, Liam’s speech is packed with hesitations – with ‘Nos’ that dissolve meaninglessly into ‘Yeas’ and stuttering, stretching, blank silences. Lots of the time, Liam simply parrots back what’s been said at him. It’s as if he doesn’t trust his words, his head. He isn’t stupid – he just isn’t given the time or space to think or speak for himself.

So there are no words for Liam – and he sure as hell aint stood centre stage (in fact, he barely stands still at all). There is also no touching. The stage is extraordinarily busy, yet Liam is totally alone. The first thing Liam touches is himself, when he masturbates in the park with a sly grin on his face. After that, he touches a stray dog and – well – that might be just about it. Everyone else is walking in the opposite direction.